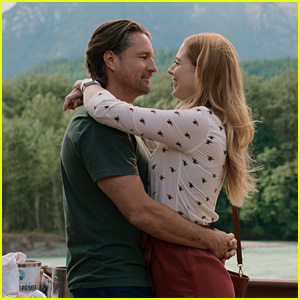 The fourth season of Virgin River is now streaming on Netflix and the show’s stars Alexandra Breckenridge and Martin Henderson are opening up about how the ending was originally different.

The new season deals with Mel wondering if the father of her baby is her deceased husband Mark (Daniel Gillies) or Jack (Henderson). While Jack is supportive and excited, the question of paternity continues to gnaw at him.

The rest of this post is going to contain some spoilers, so stop reading now if you don’t want to know what happens!

THIS IS YOU LAST SPOILER WARNING!

The ending was originally going to be different.

“When we talked about the beginning of the season before we started season 4, I really I was like, ‘Ugh, it feels heartbreaking to me if Mel is pregnant with Mark’s baby. It just feels like a letdown, so I am really glad that they decided to go in the other direction,” she added.

Martin also expressed his relief to finding out the new ending.

“I felt that at this juncture, season 4, we’re many seasons in. We’ve watched these guys with their mutual troubled pasts come together and there’s this promise of love and their connection and their attraction is undeniable. So the potential can only be for good,” Martin said. “But like all the dramas, we didn’t have to watch them navigate through all of the conflict and where they’re incompatible and they try to figure that out, which keeps you compelled. I think it’s a perfect time to give the audience something to really celebrate. Obviously there’s people who are going to want the wedding and I don’t know if that’s going to happen but there’s certain things that you want to give the audience.”

Yes, a fifth season is already in the works!