JEOPARDY! fans have spotted a misprint on official show merchandise.

The treasured trivia show-in-transition has been slammed for numerous spelling errors recently.

Jeopardy! fans spotted a mistake on the show’s official 2022 calendar[/caption] Ken Jennings and Mayim Bialik are split-hosting this exciting season, but spelling errors on-screen have made viewers furious[/caption]

Ken Jennings, 48, and Mayim Bialik, 46, are hosting the currently airing season of Jeopardy!.

They began filling in for the legendary Alex Trebek after his tragic 2020 passing and a fleet of Season 37 celebrity guest hosts, including now-disgraced Mike Richards.

The permanent hosting slot between them is still unannounced with Season 38 ending on July 31st, 2022.

But with all eyes on the show’s integrity, one fan was left with buyer’s remorse at home. 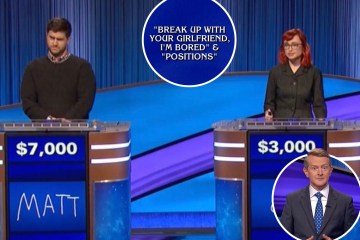 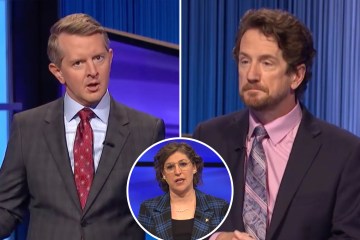 Jeopardy! fans spot player with secret TV past and are 'refreshed' to see Ken

They buzzed into Reddit having purchased the show’s official 2022 Daily Calendar.

Flipping through, they came to a page that they said didn’t make sense.

The user wrote: “Jeopardy daily calendar mistake for July 16?” as it asked: “Holly Hunter reprised her role as Elasticgirl in this sequel.”

The answer according to the calendar? The Incredibles.

However, other fans instantly and rather hilariously agreed the July 16 page was not so correct.

“Yes, it should be Incredibles 2,” one noted.

“Or the answer should have been phrased as “in the sequel to this movie,'” wrote another.

Even more agreed that the clue seemed to be asking for The Incredibles 2.

“Yes! That’s what I thought it should be too,” one chimed in.

A fifth even tore: “Totally Incredibles 2. Boy I really hope somebody got fired for that blunder.”

According to Amazon, “The calendar follows the familiar answer-and-question format.

“It features clues with assigned dollar amounts and a Final Jeopardy round where players can wager all or part of their ‘winnings.'”

The description of the nifty interactive $17 item explains into how to “play,” adding,

The calendar chaos, however minor, comes after a few weeks of spelling snafus.

During July 18th episode – Ken’s first since his long hiatus – contestant Erica Weiner-Amachi wrote down a response that some viewers thought to be illegible.

Host Ken read the clue, “Asked to design a new set for a re-staging of this 1952 play, Alberto Giacometti came up with one scraggly plaster tree.”

The Philadelphia native scribbled what appeared to be the desired answer: “Waiting for Godot” though the last word trailed off.

Ken went on to accept the statement as correct.

During that game, Sadie Goldberger lost in Final Jeopardy! because her response of “Harriet Tubman” was deemed as false after judges thought her penmanship was illegible.

“Jeopardy, this didn’t count, but then this one did??” one fan wrote after the second episode aired.

Fans said Sadie was robbed of a win after having the correct answer but not writing it out in full.

Mayim told Sadie: “… It looks like you were going for ‘Harriet Tubman’ but you did not finish, so unfortunately that is not going to be acceptable.”

The player nodded in agreement, but seemed to look disappointed in the results.

She ended up wagering $7,500, which would have given her a grand total of $17,300 if her answer was accepted and would have beaten the champ at the time Megan Wachspress.

“Sadie was flat-out jobbed out of a win. I read it right away on the reveal as Harriet Tubman,” one angry fan wrote at the time.

“They’ve counted Final Jeopardy! responses with worse handwriting than that.”

Then-winner Megan would eventually respond herself and tweet: “It’s probably inappropriate for me to say anything about the judges’ call in FJ yesterday (you can see my immediate reaction on the tape).

“But will say I’d love to see Sadie compete again (if she wants to!).

“She is a formidable and gracious player with impressive knowledge.”

Last month – though not the actress-turned host’s fault – there was ironically a typo in Final Jeopardy just days after the spelling snub which couldn’t have come at a worse time.

Fans were flustered since last month, left player Sadie Goldberger was snubbed a win when her answer wasn’t allowed, but right player’s ‘Waiting for Godot’ was weeks later[/caption] There were also recently 3 ‘Ls’ in ‘equally’ during Final Jeopardy! from the show[/caption]

Some beneficiaries of Fayose plotting his downfall – Ekiti PDP chair

Today24.pro
10 Over The Top Boss Moves We DID NOT SEE COMING Rotec team signs up to Santa Abseil challenge in support of St Margaret’s Hospice Care Kate Middleton will take on tennis legend Roger Federer at secret location to raise money for charity Matthew Judon Fed Up With Joint Practices? Twitter ‘Like’ Hints Feelings