AS an Ofcom report into the UK’s internet habits declares tech companies must do more to protect women online, writer and broadcaster Amy Nickell, 32, from Hertfordshire, shares her experience of facing a social media pile-on.

Leaving the Good Morning Britain studio, following a lively on-air debate about gender roles, I felt pleased with how it had gone.

I hadn’t said anything particularly remarkable (or so I thought) in response to a theatre company that had caused controversy by asking for “female-identifying mothers” to help write a new play.

When I’d suggested men could be mothers – for example, a husband who had lost his wife, or a male single parent – I’d managed to get a rise out of presenter Piers Morgan.

But I never imagined what was about to erupt.

As soon as I climbed into the car to go home, and switched on my phone, it started pinging with social media notifications. 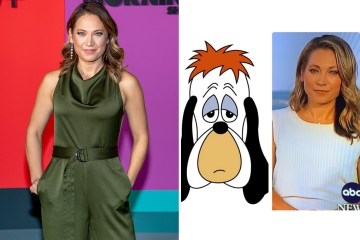 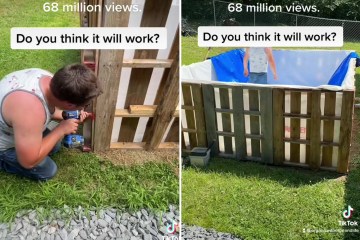 My man built a pool from old pallets, trolls said it’d fail but it didn't

“Who does that blonde bird ‘Karen’ think she is?”

“F**k off my TV, you’re exactly what’s wrong with the world.”

What started with a trickle of comments quickly snowballed into hundreds and eventually thousands of abusive and often frightening posts by enraged strangers, all directed at me.

This was 2019 and I hadn’t experienced a true social media backlash before.

As a regular commentator on TV and radio since the launch of my book Confessions Of A Single Mum in 2018, I was used to a flurry of comments on my platforms in the hour or so following appearances, but I realised that this one wasn’t going to blow over after a few minutes.

Instead it was the beginning of a 24/7 campaign of abuse.

“You make me want to hang myself”, wrote one person, while others demanded that I “end” myself.

People researched my old high school and university degree. Some even told me my bra size and pondered the colour of my pubic hair.

Suppose you imagine every dark thought you’ve ever had about yourself, added to everything you’d never want to be said behind your back – that’s probably close to the deluge of messages I received.

They found out my email address and DMed me on Facebook, and that night I received a mobile phone call from a total stranger to inform me of what a “bitch” I was.

I hung up and blocked the number before they could call back.

‘You make me want to hang myself’, wrote one person, while others demanded that I ‘end’ myself.

I don’t know how they tracked down my number – it was terrifying, and left me convinced someone would be waiting for me outside my house every time I left home and that the paintwork on my car would be keyed.

At the time, I was living alone with my then six-year-old son Freddy, and I grew worried people might recognise his school uniform from pictures on social media and find us at drop-off or pick-up.

I was worried that word might have travelled to the school, and the teachers were sniggering behind our backs.

I did consider involving the police, but continued to hope it would subside.

After a few days, I tried to leave my phone alone. I’d been responding to some of them, trying to reason with the arguments mixed among their insults, but it wasn’t helping – the notifications kept pinging. The attacks kept on coming: “Your tits are more interesting than your comments”,

“You are scary and sad, I would hate to be in your sad head”, and “As a woman you are totally embarrassing and I can’t stand you.”

It was impossible to defend myself. I felt strapped into a rollercoaster with no idea where it was headed next.

Every morning, I’d wake up to fresh reams of notifications, and it felt like this was my default now.

Probably the worst point was realising I’d been parodied by an alt-right Canadian YouTuber, who had taken my clip international about a week after the show.

Now the comments were landing in huge multiples from the US and beyond as the clip racked up millions of views.

Today those views stand at 2.5 million. I still have no idea why what I said caused so much hate.

After a week or so, it started to die down and I felt like I could start to breathe again, but even now, three years on, I still receive nasty comments about that clip whenever it resurfaces.

In an awful way, I have become desensitised to it – we women have grown used to having the unthinkable said to us.

And the experience changed the way I use social media. I don’t post as much and think carefully before I do about whether what I’m about to say might cause an onslaught.

I have thought about deleting Twitter, but as a broadcaster I rely on it for so much of my news, although I don’t look at YouTube comments any more, because they’re generally the worst.

In my experience, the most persistent and degrading messages have all been from men.

And it’s women – even those with jobs out of the public eye – who are most commonly the victims.

Recently, Ofcom surveyed 6,000 people for its Online Nation study, and 60% of women said trolling was particularly concerning, compared to just 25% of men.

The survey also reported that, although women spent more time online than men, they feel less able to express an opinion there.

She said: “The social media companies in particular need to take more action.

“They need to talk to women on their services, find out what they think, give them the tools to report harm when they find it and, above all, show they’re acting when something’s gone wrong.”

Indeed, women being trolled online has become so par for the course that a Coronation Street storyline shows local councillor Maria Connor abused by strangers on the internet.

I think there is an idea that because I work in broadcasting, I’m fair game. I’m paid to give my opinion publicly, so I should expect to be hung out to dry.

And in an awful way, I have become desensitised to it – we women have grown used to having the unthinkable said to us.

Sometimes, I look at passersby with suspicion, wondering if they have an outspoken online alter ego.

I have colleagues at GB News, where I am now a regular panellist, who are subject to daily racist taunts, rape and death threats – all for daring to express an opinion.

The personal comments about the way I look are the ones that stab right where it hurts, always managing to effortlessly hit the exact intended nerves.

“Regarding Amy Nickell, I wish they’d make her cover up her fat, pasty legs and cankles. She personifies everything that can physically go wrong. A good advert for loose-fitting trousers,” one tweeter wrote after a recent appearance on GB News.

But the ones that sting are posts that target my insecurities about being a single parent, like the tweet I received telling me: “There’s little wonder that Amy Nickell is divorced. I’m just surprised anyone would consider marrying her in the first place.”

I’ve started to block the worst ones, but oddly I prefer to have some awareness of what people are saying.

I’ve now taken steps to lock down some social media solely for friends and family, such as Facebook. It’s made me paranoid.

If I catch someone’s eye for longer than two seconds, I’m convinced they’ve seen me on TV and concluded I’m a terrible person.

I have colleagues at GB News, where I am now a regular panellist, who are subject to daily racist taunts, rape and death threats – all for daring to express an opinion.

Sometimes, I look at passersby with suspicion, wondering if they have an outspoken online alter ego.

It doesn’t make me want to stop doing what I do, but it can make me doubt what I do, and it worries my fiancé Jonathan, 42, a musician.

We met a year ago on the dating app Hinge, and his reaction to the comments reminded me how not normal this communication is.

He’s also been vocal about where these comments could lead, and encourages me to take them seriously – seeing the potential dangers.

Shockingly, I’ve even had distant relatives and a former lecturer recently jump into abusive comment threads about me. I didn’t respond.

We deserve to know the identities of the individuals sending these comments, and it’s frustrating that many continue to hide behind anonymous accounts.

Freedom of speech underpins democracy, but when someone is sending persistent violent messages, this needs to be dealt with.

The government’s new Online Safety Bill, which aims to criminalise trolls, could be a step in the right direction, but the concern is that its subjectiveness could end in censorship.

I welcome healthy disagreement, however, social media has gifted men a licence to abuse women online with no repercussions.

This Wild West is failing us all.