A mare who survived two colic surgeries and a serious infection to return to showjumping is heading for the national championships next month.

Natalie McQuiggan and her Dutch-bred 12-year-old Flame Formia have been winning at 1.20m this summer, as well as qualifying for the members’ cup at the British Showjumping National Championships, but at the start of last year, even riding was looking unlikely.

“It’s felt like she’s had every curve ball thrown at her; her case was probably about as complicated as they come,” Natalie told H&H. “But with all the surgery and rehab, she’s come through, so there is always hope.”

Natalie said she was asked to take “Mia” to sell, four years ago, but the combination clicked and Natalie kept her.

“She had been used to 24/7 turnout for over 18 months, so trying to get her to adapt back into a regime was tricky; I fell off twice at our first show before I even got in the ring!” Mia said.

“She’s a bit quirky; she clears the warm-up and will usually have a bit of a moment before the bell goes when she launches into orbit. But she’s a good girl.”

The pair had jumped up to 1.20m level successfully, but in January 2021, Natalie thought Mia did not look right.

“I think it may have been partly because of the lockdown; she’d been in full work preparing for the winter premier shows, then I changed her routine and workload, and then it snowed, and maybe that tipped it over the edge,” Natalie said. “I won’t ever know what caused it. She wasn’t showing the usual colic signs; not thrashing or pawing and she was eating bits and even pooed. But I know her so well, I knew something wasn’t right.”

Natalie said the first vet she called did not think Mia’s signs sounded too serious but she called another vet out, who did a rectal examination and thought the mare might have a torsion or twisted bowel.

“But we were walking her and she seemed fine,” Natalie said. “We thought we’d take her to Pool House clinic and maybe she could stay in overnight under observation to be on the safe side, but once they did all the tests, they said she was in a lot of pain and had to have surgery straight away.”

This operation was a success; Mia’s colon had wrapped itself round her spleen but vets were able to untangle it without cutting any intentional tissue away; the twist had been caught early enough that no tissue had “died”.

The mare was recovering well, eating and passing droppings, but 48 hours later, vets called to say her condition had deteriorated, and they needed to operate again.

“They weren’t sure how serious it was and said she might not be able to be woken up from the anaesthetic for welfare grounds once they got in there,” said Natalie. “I was devastated, Mia is my best friend.” 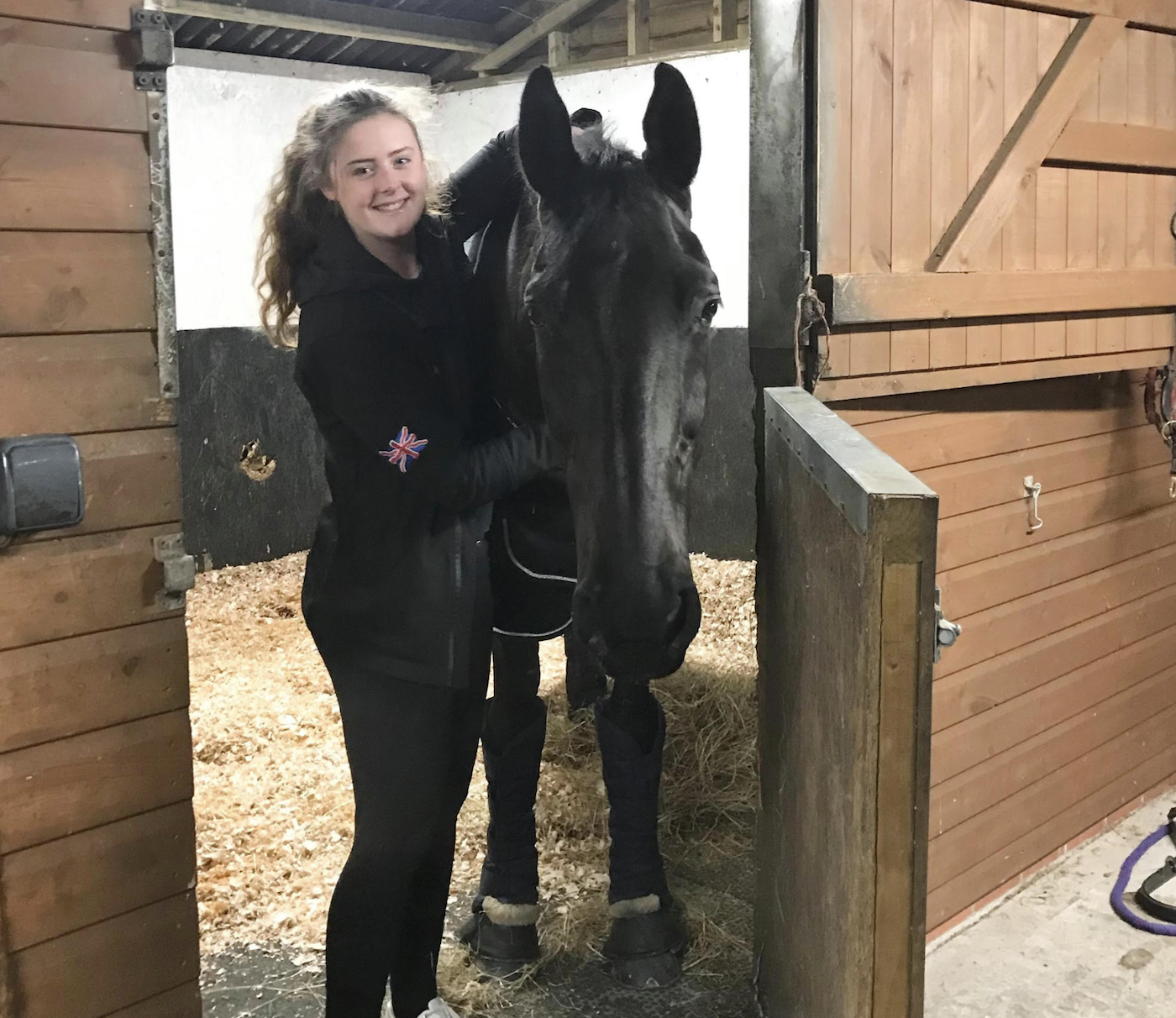 The mare had ileus; the shock had caused her gastrointestinal tract to stop working. In a three-hour operation more complicated than the first, her colon was taken out, flushed through and replaced.

Mia stayed in intensive care for two days, then in hospital for another four, after which she was “being a bit of a handful”, Natalie said, as she felt better, and was allowed home.

But she returned with a bad infection on the incision line.

“She had to have her bandage changed a lot; at one point, the pus was dripping on the floor,” Natalie said. “You think you’ve gone through the hard part but I was setting alarms every hour through the night to check on her on the CCTV, rewinding so I could see what she was doing.”

Natalie also bought a hernia belt from the US to help “hold everything in place” but as Mia felt better, she became more difficult to handle on box rest.

“She had more than 200,000 views on Instagram and TikTok from where the CCTV caught her hand-walking antics, there were some impressive stunts!” Natalie said.

After six months of hard work, Natalie thought things were better. But Mia’s body rejected some of the suture material, which was left along the line of the incisions, and led to the formation of abscesses “the size of golf balls”.

“The vets said it should make its own way out so we waited but eventually, she had to go back,” Natalie said. “The vets just gave her some sedalin, and sat underneath her, and it was like she knew they were trying to help. They made a few cuts but it all healed in three to four weeks.”

When Natalie was allowed back on board, she took things very slowly, and returned to jumping small classes in September last year.

“It felt amazing; we’ve got such a bond,” Natalie said. “I did have others I was competing but it wasn’t the same without Mia on the lorry, and now she is again. She does like to pull the lorry apart from the inside, but she can pretty much do what she likes now – she gets away with murder!”

Natalie hopes her story will give hope to others in a similar situation, but also wants to raise awareness.

“Sometimes as owners, you know your horse better than anyone and if your gut feeling is that something isn’t right, it usually isn’t,” she said. “I believe that if we had chosen to leave Mia overnight, as her clinical signs were mild, she wouldn’t have made it due to the severity of the twist, but she was just being such a brave mare that she was trying to hide it. I am so grateful to still have her with me, and grateful to my grandad, Bryan McAliece, for allowing Mia to have the surgeries to save her life.”

A horse that looks back at its flank may have colic. Credit: ©Steve Bardens
Credit: Future

Petal 1 Visa credit card review: Earn up to 10% cash back at select merchants, and you don't need a credit history to qualify