THE former stripper who partied with Prince Harry on his wild night out in Las Vegas says she’s selling the undies she claims he gifted her.

Carrie Reichert, 43, claims the Duke of Sussex handed her the black pants during their rendezvous in Sin City in August of 2012.

The image was published on the front page of The Sun[/caption] Carrie Reichert, 43, claims the Duke of Sussex handed her the black undies during their rendezvous[/caption] Harry was seen frolicking around in Las Vegas wearing a ‘Let’s Go Wild’ singlet in 2012[/caption] Prince Harry was pictured nude in a Las Vegas hotel room in 2012[/caption]

Aged 27 years old, the party extravaganza saw Harry make the front page of The Sun when he was pictured naked with a scantily-clad young woman hugging him from behind while playing billiards.

Now the once-exotic dancer, who claimed Harry was playing air guitar with a pool cue when she arrived at Encore at Wynn Las Vegas hotel room, is auctioning off the black undergarment she says he gave her that night.

She’s also putting the dress and swimsuit she wore at the time – and is hoping to scoop about £800,000.

Previously, she claimed he was “a gentleman” but alleged he was heavily under the influence. 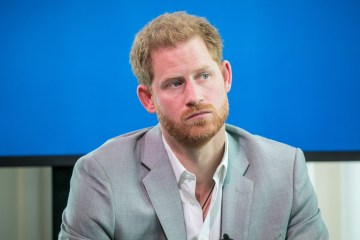 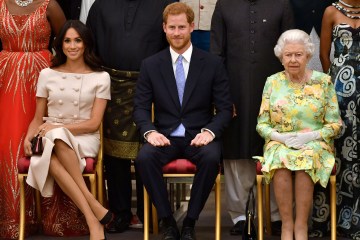 She said: “We kissed, he was naked at the time, and pretty open. It was a drunken fumble. It wasn’t romantic, just fun.

“He was a gentleman, but he was so wasted. The alcohol affected him. I was there for 15 to 20 minutes.”

But now the British-born Carrie, who goes by Carrie Royale, claims those days are far behind him, but hopes the momentum will remind the buyer of when he was “the fun prince”.

Her representative told the Mirror: “Harry has become such a bore, it’s a real shame.

“When he partied in Vegas, everyone loved him and his sense of fun. At least these pants are a reminder of what he used to be like… when Harry was the fun prince.

“It’s a shame he’s all po-faced and serious these days. Even as a married dad of two, he should still let his hair down now and again – what’s left of it any way.”

Her move to sell the item comes after Harry addressed the famous snap taken of him naked in Las Vegas in a revealing podcast.

The Duke of Sussex was quizzed over the 2012 photo where he was pictured covering his privates during a game of strip billiards.

Speaking on Armchair Expert podcast, Dax Shepard was brutally honest with the duke: “I’m really excited to meet you because, in full disclosure I’m the most ill-informed person on the royal family, at least in my circle.

“You’re the only one I ever knew and simply because you were in those awesome nude photos in Vegas. And I literally said to myself, ‘This guy’s a party!'” he added.

Harry replied: “I’m sure, you’re constantly looking for other people to go, sort of balance out your own behaviour, right?”

Dax continued to flatter the Prince, and said: “”On top of that, I was like, ‘God! This motherf***er’s got a good body!’ You are in tremendous shape.”

“Okay, now it’s getting weird,” Harry laughed, before he added: “That was a few weeks before I went to Afghanistan.”

“At least I wasn’t running down the strip, stripping or naked,” he added.

The pair joked about how Dax owns a raunchy calendar of men in the buff, and Harry said: “Why wasn’t I September?”