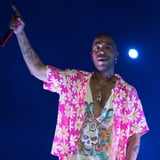 Kid Cudi headlined Rolling Loud Miami on July 22 but ended his performance after only 30 minutes after members of the audience continued to throw objects at him even after he threatened to walk off. Cudi had joined the festival lineup as a replacement for Kanye West, who dropped out of the lineup less than a week before he was set to perform. West did end up making an appearance, however, joining Lil Durk on stage at around the same time Cudi left the stage and performing a version of "Father Stretch My Hands, Pt. 1," a song off "The Life of Pablo" that features Cudi on the chorus.

The rapper was then hit with another water bottle. This prompted him to walk off stage.

The rivalry between Cudi and West seems to have influenced the crowd's behavior during Cudi's set, as fans were reportedly chanting West's name during it, per Consequence. West and Cudi were once collaborators and friends but developed a rivalry when West announced that he had removed Cudi's feature from "Donda 2" due to Cudi's friendship with Pete Davidson, who is dating West's ex-wife, Kim Kardashian.

"Just so everyone knows Cudi will not be on Donda [2] because he's friends with you know who," West wrote in a since-deleted note posted to Instagram on Feb. 12. Cudi addressed the post on Twitter later that day, writing, "We talked weeks ago about this. You're whack for flipping the script and posting this lie just for a look on the internet. You ain't no friend. BYE."

However, Cudi and West have feuded and reconciled before, so there's still some hope for future collaborations from the duo.

Today24.pro
College students are quietly one of Chipotle's most important customers Chinese Tourist Hot Spot Sanya Imposes COVID-19 Lockdown 2023 Audi S3 & RS3 Buyers Guide Is it worth it? How does it compare? The Shins Off-Air Performances