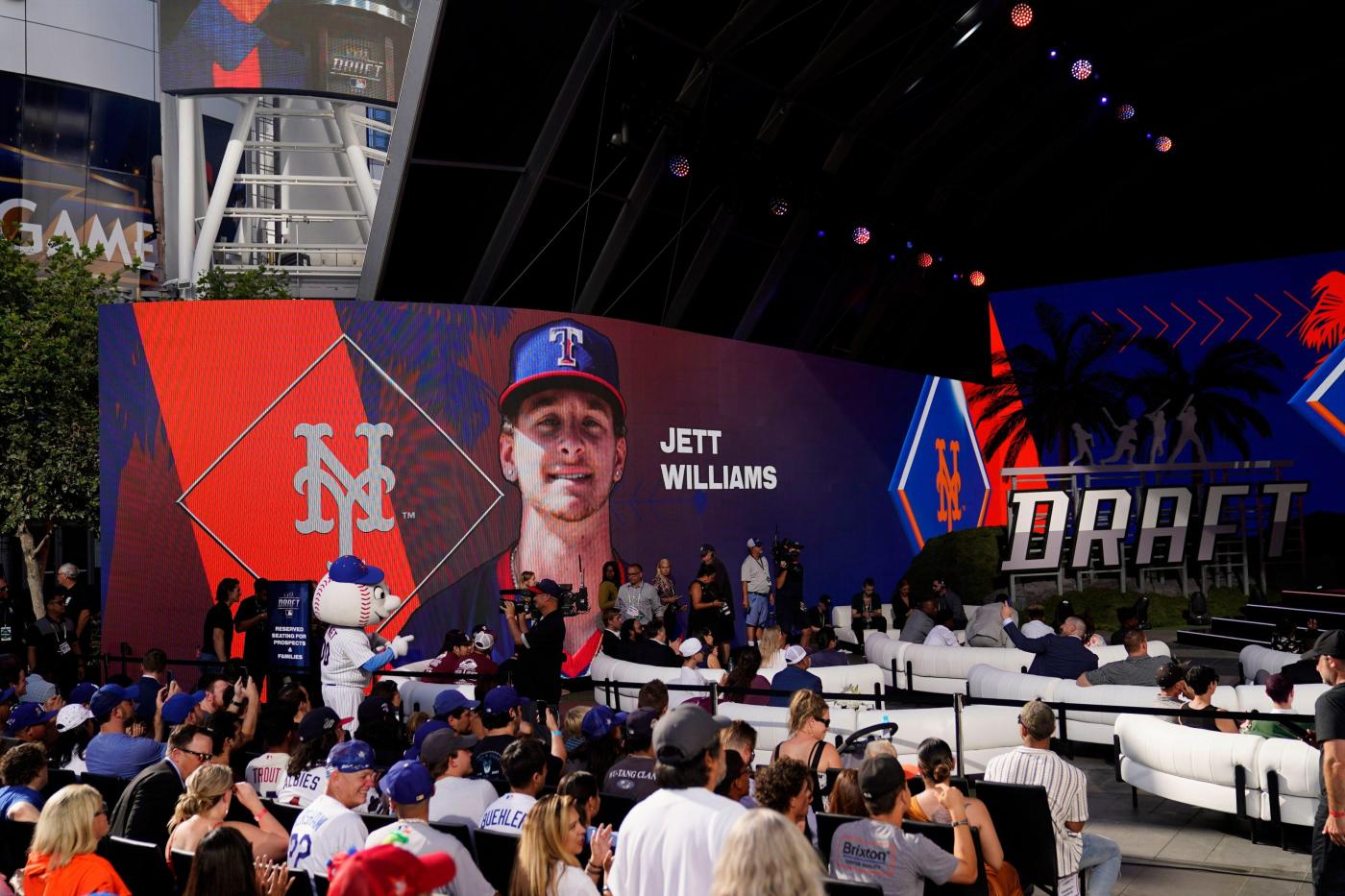 There will be no Kumar Rocker saga with Jett Williams.

The 14th overall pick in last week’s draft, Williams put pen to paper on Friday and officially became a member of the Mets’ organization. The team hosted him at Citi Field prior to Friday’s game against the Padres, giving the 18-year-old a chance to watch batting practice on the field, meet the New York media for the first time and soak in everything an MLB stadium has to offer.

Williams was asked what stood out to him about Citi Field.

“The atmosphere,” he responded. “I’ve never been here before, so it’s pretty special just being here and being around everybody. It’s pretty awesome.”

Certainly not the biggest guy, Williams has been praised for his bat-to-ball skills and foot speed. Standing 5′8″ and weighing 175 pounds, Williams played shortstop at Rockwall-Heath High School in Heath, TX. By signing with the Mets, Williams will forego his commitment to Mississippi State University. According to multiple sources, Williams’ signing bonus from the Mets was $3.9 million.

With two stud earrings glistening in both ear lobes, Williams wore a personalized Mets jersey and standard blue and orange hat. He had a very professional, likely coached demeanor while answering reporters’ questions and getting a tour of what he hopes will be his future workplace.

Drafted out of high school, Williams will likely need more minor-league seasoning than the members of his draft class who went to college. Just a few months removed from graduation, Williams has a long way to go. He will report to the Mets’ affiliate in Port St. Lucie at the Florida Complex League but has his eyes firmly fixed on Seaver Way.

“This is the ultimate goal,” Williams said, looking around at a big-league stadium that was slowly filling up on a sunny Friday night. “You definitely don’t want to be down there long.”

Several members of Williams’ family were with him, and the young infielder revealed that he has a connection to the state of New York. As a very small child, he lived in Port Jefferson and has visited the big city many times.

In addition to getting a glimpse of life in the major leagues, Williams said he’s also had the chance to speak with other members of the Mets’ farm system. He said he chopped it up with fellow Texan and Mets’ second-ranked prospect Brett Baty, who is currently hitting .290 at Double-A with a .490 slugging percentage and double-digit walk rate.

“Just kind of getting their take on things and their opinions,” Williams said of his conversations with the Mets’ up-and-comers. “But I’m just going to go out there and play my game. Hopefully I’ll make it in a couple years.”

Following his senior year of high school, Williams was named the Offensive Player of the Year by the Dallas Morning News and the offensive MVP of his district. He hit .411 with seven home runs and 24 stolen bases in his final year of amateur ball.

The Mets have not announced a signing yet for Kevin Parada, their other first-round pick. Draft picks have until August 1 to sign with the team that selected them. Parada was taken with the 11th pick, which the Mets were awarded for failing to sign Rocker last summer. Rocker re-entered the 2022 draft after playing in an independent league and was selected third by the Texas Rangers.

As for Williams, he wasn’t shy about declaring admiration for some guys that might be his teammates one day. Questioned about who he’d most like to meet, Williams went straight for the big ballers.

“Hopefully Lindor, Scherzer, someone, I don’t know,” he laughed. “But Lindor, man, I love Lindor.”

When he was taken eighth overall by Cleveland in the 2011 draft, Lindor received a $2.9 million signing bonus, one million less than Williams just agreed to. If Williams felt brave enough, that would have been a good place to start some good-natured ribbing.

Today24.pro
Matthew Judon Fed Up With Joint Practices? Twitter ‘Like’ Hints Feelings How Charlize Theron and KiKi Layne Spar in The Old Guard Anatomy of a Scene 10 Over The Top Boss Moves We DID NOT SEE COMING Rotec team signs up to Santa Abseil challenge in support of St Margaret’s Hospice Care