A US Marine allegedly stabbed his pregnant ex-wife to death on a highway in Hawaii.

Dana Alotaibi, 27, was stabbed multiple times on the H-3 highway after an apparent fight with her ex-husband, Bryant Tejada Castillo, according to police in the state.

Drivers on the highway “observed a male standing over a female, stabbing her multiple times,” Deena Thoemmes, Lieutenant of the Honolulu Police Department, said at a press conference.

“It has been determined that the victim and the male were married, and had recently been going through marital problems,” she continued. 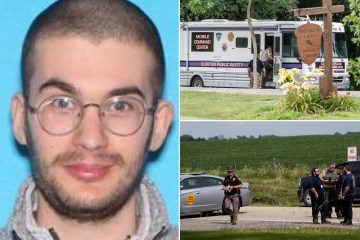 Mom, dad and six-year-old girl are shot dead in horror attack at campground

According to the Lieutenant, “they were arguing before he stabbed her multiple times that caused her fatal injuries.”

One driver, who did not want to be named, told local media that he pulled over to help after thinking it was just a fight.

He told KITV: “I got there, I pretty much froze out of fear and shock.

“Could you imagine being stabbed in the neck and then watching as your life just literally leaks out of you, and everyone around you either doesn’t know what to do, or is too shocked to do anything about it.”

The witness said he then tried to help Alotaibi while others tried to restrain Tejada Castillo before he fled.

Thoemmes said the suspect escaped into the woods with the knife in his hand.

When the authorities found him hiding in a bush, they discovered he had stabbed himself, police say.

He was then taken to the hospital while in the police’s custody.

KITV reported that Tejada-Castillo is in serious condition.

The ex-couple had been married for nearly three years, according to Alotaibi’s mother, Natalia Cespedes.

Tejada-Castillo was the one who filed for divorce last November, but it was uncontested and granted in June, according to court records obtained by KITV.

Prior alleged domestic violence incidents between Alotaibi and Tejada-Castillo will be looked at by police, as well as social media posts of their relationship.

Alotaibi’s mother said that she planned to have her daughter move to Virginia where she lives.

The police said that witnesses are being interviewed and the vehicle found at the scene will be processed, pending a search warrant.

The Marine Corps pledged their cooperation to the police.

A statement from the corps said: “The Marine Corps is aware of a tragic incident that occurred allegedly involving a US Marine currently assigned to the 3rd Littoral Combat Team.

“The 3rd Marine Littoral Regiment and Marine Corps Base Hawaii will continue to cooperate fully with law enforcement officials as the details surrounding this incident unfold.

“The Marine Corps extends its deepest sympathies to the family and friends of those involved.”

Tejada-Castillo has been charged with second-degree murder and his bail is set at one million dollars.

Alotaibi was three months pregnant when she was fatally stabbed[/caption]