TOTO WOLFF has hinted that Lewis Hamilton could stay on to notch up his 400th F1 race.

Hamilton clocks up the milestone on Sunday in France and his Mercedes boss was quizzed on the Brit’s landmark achievement.

Hamilton still has another 18 months on his existing contract with the Silver Arrows.

And Wolff says he cannot see any reason why the 37-year-old would not extend his stay with the team.

He said: “We talked a few weeks ago about how long a partnership can go and the figure discussed was about five to 10 years, so I think we can go to 400 [races].

“Someone said you have to win the eight [world title], so why not 10?” 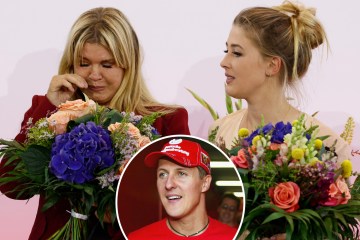 Wolff’s comments could be taken with a pinch of salt, but it is not inconceivable Hamilton could race on.

Given the current F1 schedule of 22 races per season, it would only take another four years to reach his 400th GP.

If he were to stay on and achieve it, he’d be 41 – just a year older than the current eldest driver on the grid, Fernando Alonso.

Hamilton is yet to win a race this season.

He has managed to make the podium four times but all of those were third placed finishes.

It would take something special for Merc to out-perform frontrunners Red Bull and Ferrari this weekend and for Hamilton to end his 12-race winless streak.

Hamilton, who starts today tomorrow in fourth, was almost a second off Leclerc’s pole time.

He said: “My last lap was great. I finished it and thought that was an awesome lap but I was still nine tenths off the guys ahead.

“I am not sure why that gap has got bigger over these two races. They [Leclerc and Verstappen] are in their own league in that respect performance wise.

“When we say we had updates to the car, we brought the tiniest thing, so it could be half a tenth, maybe a tenth if it worked perfectly. It’s difficult to really see it.

“I came here thinking last race we were three or four tenths off and I thought maybe this weekend we would maybe two or three tenths off but we have been a second off all weekend.

“I was happy with my lap and with my performance but they are in their own place.

“But we are still there so everyone behind me is struggling too so we just keep fighting.”

6 of the most exciting reveals from She-Hulk episode 1

Today24.pro
10 Over The Top Boss Moves We DID NOT SEE COMING Kate Middleton will take on tennis legend Roger Federer at secret location to raise money for charity Matthew Judon Fed Up With Joint Practices? Twitter ‘Like’ Hints Feelings How Charlize Theron and KiKi Layne Spar in The Old Guard Anatomy of a Scene