DAME Deborah James has won a posthumous award for her hit podcast – as her co-host paid a touching tribute.

Dame Deborah hosted You, Me and the Big C alongside Rachael Bland and Lauren Mahon from its inception in 2018 until a few weeks before her death last month after a battle with bowel cancer.

On Saturday, the show’s remaining presenter – Lauren – accepted the Podcast Champion award on behalf of her departed colleagues and the rest of the team at the British Podcast Awards.

Lauren said: “Me and Deb had a little joke when Rachael died that I couldn’t just do the podcast by myself because I couldn’t call it ‘Me, Me and the Big C’.

“The podcast is our happy place. It’s a bit surreal to be standing here without both my girls.

“We knew this was a risk, that some of us would die when we started it, but we wanted to continue to champion it.” 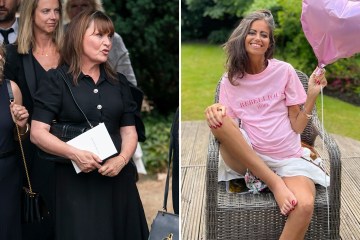 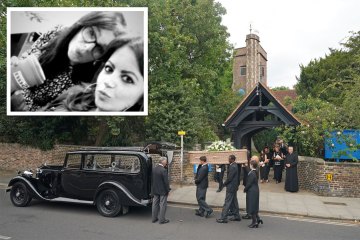 She continued: “There is more work to be done. I don’t know what it looks like, but the podcast has always been a service.

“Last time we won at these awards, we dedicated the award to Rachael. I’m so proud to say that this is for Dame Deborah F***ing James!”

Rachael passed away in September 2018 after battling breast cancer, and her widower Steve has occasionally co-hosted with Rachael and Deborah.

The award comes days after Deborah’s funeral took place on Wednesday, with her husband Sebastien and their children Hugo and Eloise leading the procession.

For each Dame Deborah James rose sold, £2.50 is donated to the BowelBabe fund — which today had raised  £7.4million for cancer charities in her memory.

In her final days, Debs raised millions for the newly- launched fund which Cancer Research UK will help allocate to causes she cared about most.

Meanwhile Lorraine Kelly revealed the funeral was “full of laughs and tears”.

The 62-year-old said: “There were a lot of tears and there really was genuinely a lot of laughs too as well as we remembered her, so it was great.

“She planned it all and it was perfection, as you would expect.

“I was honoured to be there with some of our team.

“It was a beautiful, beautiful send off. It was so lovely. It was sad, but it was also a celebration of an amazing, amazing woman.”

Deborah passed away last month aged 40[/caption] Deborah worked on the You, Me and Big C podcast from 2018[/caption]