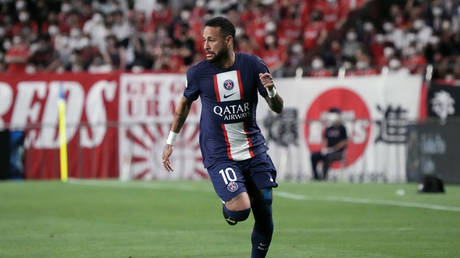 Paris Saint Germain forward Neymar would like to stay at the club this summer and beyond if it were up to him, as confirmed by comments he made to the French press this weekend.

PSG are currently in Japan on their preseason tour and notched their second victory in the Far East with a 3-0 win over the Uwara Reds on Saturday.

Later that afternoon, comments that Neymar made to the AFP in Tokyo were circulated online, and had the Brazilian declare that he wants to stay at the Parc des Princes.

"No one from the club told me anything about the plans for my future, as things stand," he added.

"I don’t know what kind of plans they have for me - I want to stay," Neymar reiterated.

“I don’t know what kind of plans they have for me - I want to stay”. pic.twitter.com/y7lEXvBBEV

Reports had previously claimed that PSG were looking to offload their world record, €222 million from FC Barcelona in 2017 and that Neymar was also willing to flee the Qatari-backed giants due to comments made by president Nasser al-Khelaifi in the media.

Probed on Neymar potentially departing in the current summer transfer window in a recent interview with MARCA, Al-Khelaifi refrained from mentioning Neymar by name but stressed that his club now managed by Christophe Galtier wanted "young, talented, committed players with a winning mentality, people who want to die for this badge".

"We want to be stronger collectively, to play as a team and for the club to be above all," Al-Khelaifi went on, adding that "some will come and some will go" but that negotiations would remain private.

Earlier this week, it was also said that Neymar had been offered to Premier League champions Manchester City who turned him down. Yet their manager Pep Guardiola has insisted that reports on this weren't accurate.

"I am so sorry for Le Parisien, but it is not true," protested Guardiola.

"I am sorry for them because the information they have received is false. Neymar is an incredible player and by my information, he is a nice guy.

"Let him express himself at Paris. City buy 150 players every summer, and it is not true. I am sorry for Neymar, of course," the Catalan finished.

With a contract that runs until 2027, Neymar is set to start the Ligue 1 season with PSG on August 6 away at Clermont Foot.