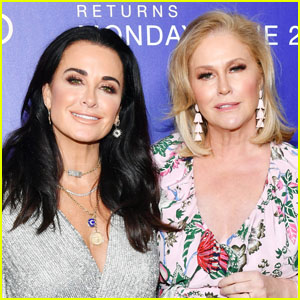 Kathy Hilton is speaking out about her relationship with sister Kyle Richards.

The recently released mid-season trailer for Real Housewives of Beverly Hills season 12 hinted at a potential conflict between the two sisters stemming from their explosive trip to Aspen.

While the pair have both been quiet about exactly what went down, Kathy opened up about their falling out in an interview with E! News‘ Daily Pop.

“I said some things that I should not have said,” Kathy explained. “It was how I was feeling.”

She went on to say that while fans saw her having a conversation with Lisa Rinna about the comments she made, she “never said anything about Lisa.”

“I said them to Lisa and it was off-camera,” Kathy clarified. “I think she just was unhappy that I said anything. And that’s her business.”

She continued, “I have to take the responsibility. I was frustrated. I should not have said anything. And I did apologize and apologize.” Kathy said that thankfully she’s now “in a better place with Kyle.”

The Real Housewives of Beverly Hills airs Wednesdays at 9 p.m. on Bravo.

Another RHOBH cast member spoke out about the trip to Aspen a few months ago, saying she was “regretful” about the way she behaved.

More than 115,000 Royal Mail workers to strike four times over next month