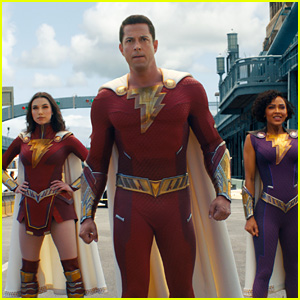 The trailer for Shazam! Fury of the Gods was released during a panel at 2022 Comic-Con and it’s an action-packed look at the upcoming DC Comics movie.

The movie continues the story of teenage Billy Batson (Asher Angel) who, upon reciting the magic word “SHAZAM!,” is transformed into his adult Super Hero alter ego, Shazam (Zachary Levi).

Helen Mirren, Lucy Liu, and Rachel Zegler all joined the cast for the sequel, which will hit theaters on December 21, 2022.

The trailer includes a moment when Zachary‘s character Shazam is talking to Helen‘s character and he brings up the Fast & Furious movies, which real-life Helen stars in. She plays Queenie in several of the movies!

“Look, I might not have as much experience as you because I’m not super old like you, but I’ve seen all the Fast and the Furious movies, lady. It’s all about family!” he says.

Watch the trailer below!

Meet a 39-year-old remote worker making $116,000 who says he could quit and get a job that pays more — but he'd rather have the flexibility to work from home