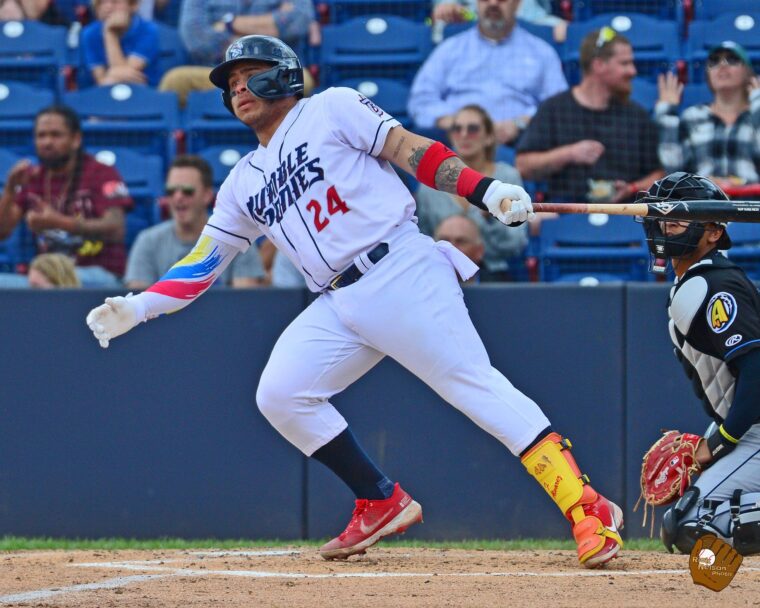 Mets fans were rightfully concerned when top prospect Francisco Álvarez was removed from Friday’s game after slipping when rounding first base in the 10th inning. After missing just Saturday’s game, Álvarez returned to the lineup on Sunday and continued his power surge by blasting his 15th home run of the season.

Home runs by Fargas and Blankenhorn in the second and third innings, respectively, supplied the Mets with five of the six runs that they would score in Sunday’s game. Their only other run came when Vientos reached base on an error earlier in the third inning. With his home run, Blankenhorn is now hitting .344/.412/.574 in June. Despite his slow start, Vientos is up to 15th (out of 101 qualified hitters) in the International League in OPS; meanwhile, he is one of the youngest players in the league and has only had one plate appearance against a pitcher younger than him this year.

Kisena struggled mightily in his Triple-A debut, giving up five earned runs, including two home runs, before getting pulled with 94 pitches in the sixth inning. Reed was solid in his first appearance since his unsuccessful stint with the big league team. Montes de Oca has also struggled since his promotion to Triple-A. He has walked and hit twice as many batters (5 walks; 3 hit batters) as he has struck out (4) since his promotion.

The Rumble Ponies were held without a run until Álvarez, making his return to the lineup after leaving Friday’s game with a minor injury, blasted his 15th home run of the season, a three-run shot to left field. Álvarez is fifth in the Eastern League in OPS this season, and his 11 home runs over the last 30 days are tied for the most in the minor leagues. In the eighth inning of Sunday’s game, Brandon McIlwain blasted the first home run of his Double-A career, another three-run blast that gave Binghamton an insurmountable lead. McCann was making his third rehab appearance, this was his first time playing a full nine-inning game at catcher.

No. 1 @Mets prospect (MLB's No. 7) Francisco Álvarez just keeps teeing off for @RumblePoniesBB.

Griffin had his first scoreless outing in his eight starts since joining the Binghamton rotation. Núñez has been uncharacteristically wild in the last two outings of his rehab from Tommy John surgery: after walking nobody over his first five appearances of the season, he has walked two batters in each of his last two appearances.

The Cyclones had just four hits and one walk in Sunday’s game. All three runs came home on Schwartz’s three-run home run to right field in the first inning. That was only Schwartz’s second home run this year, but he has been heating up recently, even if the power hasn’t fully emerged yet. Since the start of June, Schwartz is hitting .349/.397/.460.

After pitching to a 2.68 ERA over nine appearances with St. Lucie and having two strong appearances following his promotion to Brooklyn, Moreno had his first real misstep of the year on Sunday. Even so, his six strikeouts were tied for his second most in any start this season.

St. Lucie’s offense was limited to just four hits and went 0-for-5 in Sunday’s shutout. After walking just eight times over the first two months of the 2022 season, Ramirez has drawn nine walks over his last eight games. He has also been much better at stealing bases in June (6-for-8) when compared to the first two months of the season (5-for-11). After a blazing-hot May, De Los Santos has struggled to a .186/.284/.288, but with 24 extra base hits and 36 stolen bases, he continues to flash one of the best power-speed combos in the system.

Venutra continues to look sharp in his return from Tommy John surgery: through three appearances (6 1/3 innings pitched), he has struck out 11 batters without walking anyone. His velocity was also noticeably improved in Sunday’s start, averaging 95 MPH and topping out at 96.9 MPH on his fastball. He also generated quite high average spin rates on his fastball (2440 RPM) and curveball (2609 RPM). David simply could not find the zone in his brief appearance on Sunday; he threw just six of his 20 pitches for strikes. Gomez, who was virtually unheard-of prior to the 2022 season, continues to impress with his blazing upper-90s fastball. The pitch, which also has a high spin rate of 2470 RPM, topped out at 99 MPH and generated whiffs on 75% of swings against it.