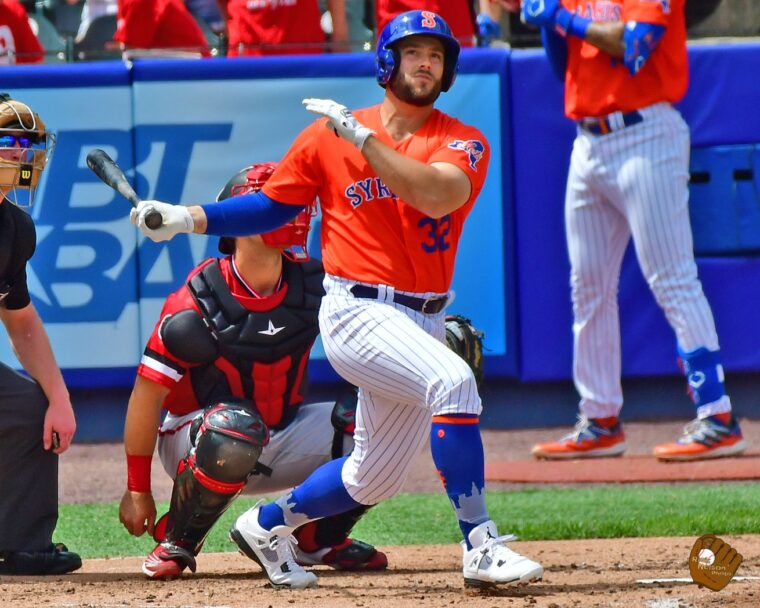 Andy Martino of SNY reports Syracuse Mets OF/DH Daniel Palka is traveling to Queens before the series finale against the Miami Marlins. As Martino cautions, this does not necessarily mean Palka will be activated, but rather, it is something the New York Mets are contemplating. Notably, he is not in the starting lineup.

Part of the reason why the Mets might’ve made this decision is Nick Plummer‘s struggles. He is currently mired in an 0-for-20 stretch. Like Plummer, Palka, 30, is a left-handed batter. Another important note is the Mets are currently carrying 14 pitchers, and as per MLB rules, they need to get down to 13 after their game today.

You know what makes a Friday night better?

Palka does have Major League experience. In fact, he was fifth in the 2018 American League Rookie of the Year voting. In that season, he played 124 games, and he had a 143 wRC+. After struggling with strikeouts the following season, he was sent down to Triple-A, and he has not played in a Major League game after that demotion.

After the 2019 season, despite the Chicago White Sox still retaining his rights, the team allowed him to sign with the Samsung Lions of the KBO. Palka posted a .639 OPS and would return stateside on a minor league deal with the Washington Nationals. He had a 123 wRC+ for their Triple-A affiliate before signing with the Mets organization this past offseason.

Notably, Palka is not on the 40 man roster meaning he cannot be added unless the Mets transition a player to the 60 day IL or designate a player for assignment. At the moment, while Tylor Megill and Colin Holderman are dealing with arm issues, it does not appear they are candidates to transition to the 60 day IL.

Internet trolls using Amber Heard's name as an insult is proof of 'the misogyny pumping through the veins of this country,' a victims' rights lawyer said

Today24.pro
Canadian Wood Council mass timber fire test performed as expected Christian Thun faces Curtis Harper on July 9 ProBoxTV card in Florida Lonnie Walker to Lakers SANDCAST: Deahna Kraft only knows one speed, ‘All in, or nothing at all’