LOVE Island viewers were left baffled this evening as they spotted Gemma Owen still isn’t sharing a bed with Luca after the recouping.

The 19-year-old headed to bed with Davide, 27, once again, while Luca slept on the sofa bed in the living room.

Gemma and Luca were ripped apart on Sunday evening as latest bombshell contestant Danica Taylor coupled up with the fish monger during a dramatic ceremony that also saw Remi Lambert dumped from the villa.

The 21-year-old dancer’s decision forced the daughter of football star Michael Owen to take back her ex-partner, Davide.

Luca was left fuming about her choice and decided he wasn’t going to share a bed with her  – but Gemma didn’t follow suit.

And this evening, Luca even carried her onto his bed but she chose not to stay. 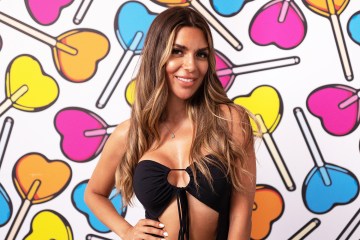 Taking to Twitter to question it, one person wrote: “Nah Luca carried Gemma to the bed this time and she still didn’t stay??? I’d simply collapse #LoveIsland.”

A second added: “Gemma went back to bed with davide? Am I missing something. If you like someone and you can sleep next to them you would. How isn’t luca seeing this or he’s just accepting it?? #LoveIsland.”

While a third added: “Wait Gemma is still sharing a bed with the Italian stallion instead of joining her man outside ?

And a fourth said: “Is Luca actually a clown. You are sleeping by yourself in bed. And Gemma is sleeping on a bed with Davide. #LoveIsland.”

On Sunday evening Luca told Gemma: “I want you, that is it. I don’t care.”

She laughed and replied: “I feel like I’ve gone back to day one again by going back to Davide.”

Luca continued: “You make me feel like a young kid who hasn’t experienced anything before and all I want to do is get to know you more and more.”

Later in the episode saw Danica take Luca on a romantic picnic with drinks on the beach.

However, Luca returned to the villa intent on rekindling his relationship with Gemma.

Joining her on the sofa, he joked: “Are you sweating because it is hot or because I was gone?” before she replied, “Why are you smirking?”

He added: “I wished you were there instead and I found it not hard to talk to her but, because it wasn’t you, I didn’t really know what to talk about.

“I wanted to send her off with a smile and make sure she was okay going into the villa but I think that will be our last chat.”

Today24.pro
Athletics’ Adrian Martinez will get starting assignment in Seattle SANDCAST: Deahna Kraft only knows one speed, ‘All in, or nothing at all’ McGregor vs. Masvidal chances heating up Canadian Wood Council mass timber fire test performed as expected