The MTV star loves to show off her usually reserved husband as she recently treated fans to a video of Cole, 34, giving a stripper pole a whirl.

Chelsea, 30, posted the video of her costume-clad husband to her Instagram Story.

In it, she calls to her and Cole’s children Watson, five, and Layne, three to open their bedroom door for a Father’s Day surprise.

The 16 & Pregnant alum and her husband also share one-year-old Walker, while Chelsea has daughter Aubree, 12, from a previous relationship with Adam Lind.

Watson opens the door to find Spider-Man, or at least dad dressed up as the web-slinging hero, waiting in the hallway. 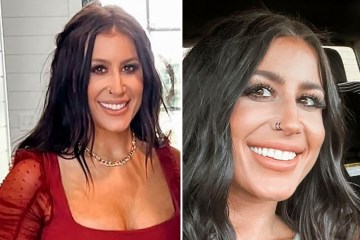 Either already too smart to fall for the costumed dupe or in utter disbelief, Watson says, “No”, then withdraws back inside his room.

Layne peaks out her head to witness the commotion before retreating to the safety of the bedroom as well.

She captions the post: “HAPPY FATHER’S DAY TO THE BEST OF THE BEST @COLEDEBOER.”

The string of videos continues, capturing Cole as he embodies Peter Parker and rushes into the bedroom.

Chelsea trails close behind, though the focus of her camera appears to repeatedly shift away from the kids and toward her husband’s spit-tight Spidey costume; particularily Cole’s butt in blue and red spandex.

In the room, Watson hides as Layne sees through Cole’s facade as she cheerfully surmises, “It is daddy!”

The Teen Mom alum follows up the video with a photo of Layne and Spider-Man fill in, through real-life personal superhero, dad Cole.

Cole has been the star of other videos posted by his soon-to-be HGTV star wife.

One in particular caught her husband honing his acting skills once again and giving his best Magic Mike impression.

The Teen Mom 2 alum each shared videos of the 34-year-old shaking his rear, onboard a party bus.

Denim seemed to be the theme of the night, as party-goers were dressed head-to-toe in the fabric.

Cole completed his look with a black fanny pack, which happy clients stuffed with bills.

But fans were thrown off by Chelsea and Cole’s outfits, slamming the couple for what they called a “tacky” look.

While another added: “That jumpsuit looks so uncomfortable.”

Cole didn’t seem to mind as he worked the crowd and shaked his denim-covered fanny.

‘HERE FOR A GOOD TIME’

This wasn’t the first time Cole and Chelsea have shown off their seductive skill set.

Last month the famous pair messed around as they renovated a home for their new HGTV reality show, Farmhouse Fabulous.

In a boomerang, Chelsea stood in front of Cole and twerked for him .

She had a shocked expression on her face while Cole looked straight into the camera with a serious expression.

Chelsea captioned the video, “Here for a good time.”

Chelsea Houska continued to show husband Cole’s behind in her Instagram Story[/caption] Cole tries to convices Layne that he’s Spider-Man as son Waton hides under the blanket[/caption] Cole DeBoer, dressed as Spider-Man with daughter Layne[/caption]

Things In The Star Trek Franchise That Practically Make No Sense

Today24.pro
Eblen knew he would beat Mousasi at Bellator 282: ‘I expected it’ A 757-acre Scottish island that comes with a mansion and a whale skeleton nicknamed 'Bony Dick' is on sale for just over $2 million Fulton vs Akhmadaliev next is a no-brainer, but will we get it? Royals vs. Athletics Friday game thread