In February 2021, the reality star revealed that she went under the knife using her big MTV paycheck.

Brittany showed off her plumper backside on her Instagram Stories, donning short spandex shorts and a blue crop top.

The Teen Mom 2 star stood next to a statue of a multi-colored soda bottle as she gazed over her shoulder in the sultry shot.

She appeared to be on an outing with friends when she decided to stop for a photo shoot to tease her new figure.

She drew attention to her rear end by adding the song “Peaches” by Justin Bieber in the post. 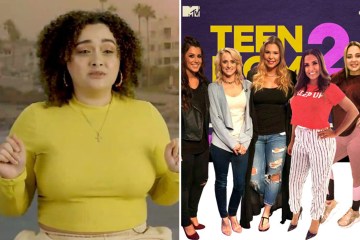 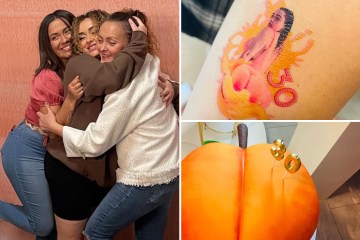 Brittany laughed at the image, originally taken by a friend, with a slew of laughing face emojis.

The TV star has proudly displayed her curvy physique on social media since her cosmetic procedure.

Earlier this year, the 30-year-old nearly busted out of lingerie in a snap she shared on her Instagram Stories.

Brittany posed in a skimpy red bralette and high-waisted panties as she covered her face with her phone camera.

The TV personality showed off her cleavage and curves in the rare photo as she shared her plan to get “tatted.”

She shared a photo of herself posing in Rihanna’s lingerie line with three different filters.

The MTV star admired her reflection in a mirror while sitting on her knees on a bed.

She rocked a pair of patterned high-waisted underwear and a black bra in the snaps.

She captioned the snaps: “Feeling savage af in my @savagexfenty  #savagexambassador.”

Fans were first introduced to Brittany after her appearances on Teen Mom 2 alongside her sister Briana who starred on the show.

MTV cameras have documented Briana’s journey as a young mother and her co-parenting relationships with her ex, Devoin Austin, with who she shares her daughter, Nova, 10, and her ex, Luis Hernandez, who is the father of her daughter Stella, four.

While not a main cast member on the show, Brittany defended her income last year to online trolls and revealed her plastic surgery makeover in the process.

The Twitter user roasted: “Did your sister pay for that too?” which set the TV personality off.

“What exactly does she pay for in regards to me? Just bc we live together doesn’t mean she gives me money,” the aunt clapped back.

As an afterthought, Brittany admitted: “Today I said f**k the gym and got plastic surgery.”

When a fan questioned the validity of the statement, she ensured: “No I really got plastic surgery today lol.”

Her sister, Briana, 28, also underwent several breast and butt augmentations over the years.

Brittany revealed the news after she defended her income from online trolls[/caption] She claimed she got her procedure using the money she made from Teen Mom 2[/caption] Her sister Briana, who is a main cast member on the show, also underwent numerous plastic surgery procedures[/caption]

What is Bobby Bonilla Day and is he still being paid by the Mets?