FROM pothead Tim in Channel 4 sitcom Space to Shaun in zombie Britflick Shaun of the Dead, Simon Pegghas always played it for laughs on British telly.

Now, after going to Hollywood to star in blockbuster franchises including Star Trek and Mission Impossible, things are getting serious for the actor.

He said: “It is a more dramatic role and something that I really relished – I trained to do that kind of thing.

“But I took a particular path and it’s really lovely to be able to jump onto another path.

“I relate more to Danny now in my life, at 52, than I do Shaun or any of those characters I’ve played – particularly Tim in Spaced, who was sort of a stoner who didn’t know what to do with his life. 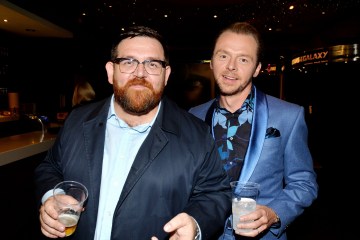 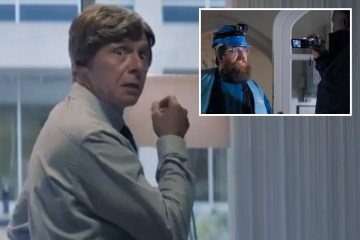 “Danny knows exactly what he wants to do with his life, he’s extremely adept at executing that, so it was really enjoyable to play a character who’s so far from what I’m known for playing.”

The Undeclared War is set in GCHQ in the future when the UK has to defend itself against a series of cyber attacks which could create nightmare scenarios.

Their last line of defence is a crack team led by Danny.

Simon, who has spent most of the last two decades in the US making movies, was tempted back to British TV by the compelling story, which starts next Thursday.

He  said: “I was extremely flattered to be sent the script, just because it’s not the sort of role that people would assume I’d be interested in.

“It just felt like a no-brainer to me. I was immediately on the phone saying: ‘Yes please – I’d like to come home’.”

As for playing more serious roles, Simon said he’d relish the chance – and joked he had a Plan B if that didn’t work out.

He said: “I’ll just go back to playing idiots.”

HERE’S Mary Berry in her finest tweeds with Edinburgh as a dramatic backdrop as she promotes her new cookery series.

The national treasure will be appearing on BBC2 and iPlayer with her new six-parter, Cook and Share.

Mary Berry will be appearing on BBC2 and iPlayer with her new six-parter, Cook and Share[/caption]

Mary cooks recipes in her mother’s homeland of Scotland, explores the incredible ingredients to be found on the Jurassic coast and enjoys the buzz of Birmingham’s city centre.

The 87-year-old former Bake Off host said: “Sharing recipes is always an utter joy for me and this series is the ultimate guide, whether you are cooking for a crowd or just for two.”

Be warned though: just looking at the list of meals she’s preparing – minted lamb casserole, tear and share bread and chocolate truffle cake – will see you pile on the pounds.

WITH a busy summer of sport ahead on BBC1, EastEnders will once again premiere each week’s episodes on BBC iPlayer.

All four episodes will drop on the catch-up site every Monday from June 27 and continue until mid-August.

And he was probably saying it during a recent flight he took from Gatwick Airport on a Spanish airline.

Jordan said: “We started veering to the left and the captain came on and said we had to do an emergency landing!

“I said to the steward, ‘Is everything okay?’ and you could tell I was panicking, and he said: ‘There may be fire on left engine’.

He added: “It was a technical issue. It wasn’t a fire.”

WALKER? I PREFER TO DRIVE

She was joined on the “campaign trail” by the snack’s familiar face – Gary Lineker – as well as fellow TV star Fred Sirieix.

Gemma Collins was out promoting Walkers crisps with Gary Lineker and TV star Fred Sirieix[/caption] Gemma and Fred where in Sandwich, Kent to find out if sandwiches were better with or without crisps[/caption]

Gemma took part in a publicity stunt for Walkers which involved attempting to gauge the public’s preference on an age old quandary: do you prefer your sandwiches with or without crisps inside them?

She and restaurant expert Fred went head to head in the town of Sandwich, Kent (where else?) to work out which option was best.

And Gemma triumphed at the end of the challenge, adjudicated by Gary, with 54 per cent saying they thought sandwiches were better with crisps inside.

To be fair they probably thought she’d run them over on that tractor if they dared to disagree with her.

THE BBC has announced Game of Thrones’ Faye Marsay and Luther’s Warren Brown will join Michele Keegan in new drama Ten Pound Poms, which is filming now in Australia.

DR WHO? I WASN’T LINED UP

AFTER playing a baddie on Line of Duty, Craig Parkinson taking the heroic lead role in Doctor Who was always a bit of a leap.

But that was the rumour for some time before Ncuti Gatwa was revealed as the new timelord.

And Craig, famous for playing treacherous DI Dot Cottan on LoD, is keen to point out he was never offered the role in the BBC1 sci-fi classic.

He said: “That whole Dr Who speculation – they love it don’t they? They love getting a list together of who it’s going to be.

“No, it would never happen, and anyway I’d probably sooner be The Master if I’m honest.”

Today24.pro
Canadian Wood Council mass timber fire test performed as expected Christian Thun faces Curtis Harper on July 9 ProBoxTV card in Florida SANDCAST: Deahna Kraft only knows one speed, ‘All in, or nothing at all’ Athletics’ Adrian Martinez will get starting assignment in Seattle