A GARDENING expert shared how a common kitchen item could help you eliminate weeds in your summer garden.

Gardeners with pets or children may consider using this all-natural weed remover since the traditional chemical process can harm them.

“You’ll want to use a special horticultural vinegar that you find at garden centers rather than the standard white vinegar you keep in the cleaning cabinet,” Mueller told the Express.

It added that the horticultural vinegar has a higher acidity level than standard vinegar. This mixture will destroy weed roots for good.

Gardeners shouldn’t use this mixture on lawn weeds but instead on the weeds that grow between paving stones. 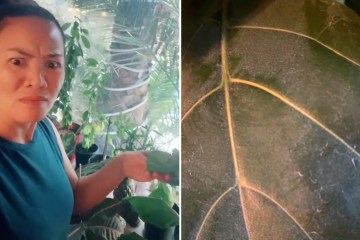 Using horticultural vinegar on a lawn could damage the surrounding grass and soil, Mueller added.

Gardeners should reportedly put the mixture in a spray bottle and spritz the plants they want to remove.

Experts also recommend doing this step around noon since the sun will help burn weeds away.

This step can be repeated every two weeks until all the weeds are gone.

Pulling the weeds out by hand is another natural way to eliminate the nuance, but this alternative can be time-consuming.

“To do it, all you really have to do is pull them out from the ground, making sure to rip out both the flowering portion above the ground and the roots below,” Mueller told the Express.

Removing the weeds by hand also helps ensure that they won’t come back.

Certain weed pullers are another way to remove weeds but Mueller told Express that gardeners should find one that doesn’t require them to be hunched over for hours.

“If you don’t want to buy anything new, you could also use a trowel from your existing garden supplies, but they’re a little less precise and could aerate additional soil, thus making it more likely additional seeds will spread,” Mueller said.

Gardeners should reportedly determine which weed class they are dealing with before deciding how they want to remove their weeds.

Figuring this out can help you determine if you can treat the visible part of the weed or if you’d better remove the entire root system so they don’t grow the following year again.

Better Homes and Gardens reported that the weed class could be identified by how tall the plant grows and where it grows.

U.S. Economy Shrank 1.6% at the Start of 2022—Though Recession Is Not Imminent, Economists Say