EKIN-SU is set to make £42k per Insta post after the leaving Love Island villa.

The bombshell is set to be rolling in it once lucrative offers come flooding in after becoming a household name on the ITV2 dating show.

Ekin-Su‘s time on Love Island will pay off handsomely when this Love Island season wraps up.

The beauty, one of the first bombshells of the season, is the highest earner of the show currently, with the ability to earn up to £42,248 per sponsored Instagram post.

10 Yetis are tracking the Instagram profiles of Love Island season 8 contestants, revealing the popularity and potential earnings of each contestant.

Gemma Owen and Luca Bish are set to really well too according to the findings. 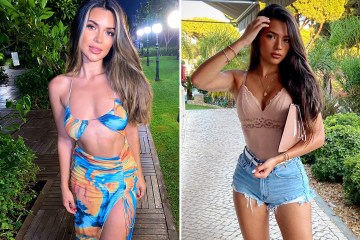 Andy Barr, CEO and co-founder of www.10yetis.co.uk said: “Ekin-Su is causing a lot of controversy this season, from showing her fiery side on Friday’s episode to then showing her loving and apologetic side during last night’s episode; the Islanders, alongside the rest of the nation, aren’t quite sure where they stand with her. “

In order for Ekin-Su to be successful with brands once she leaves the villa, she’s got to ensure that she keeps her reputation intact.

“Across the first week of the show, the nation felt as if they were watching the ‘Gemma Show’, instead of Love Island, however, even with more attention on the other contestants across the past week, Gemma is proving to be a fan favourite, with her follower numbers climbing higher and higher every week.

Gemma is currently the second highest earner in the villa; not too bad for the youngest contestant.”

Meanwhile Love Island fans think Jay is secretly planning to dump Ekin-Su for another islander – but can you guess who?

It came after eagle-eyed fans recalled Jay’s initial crush on the hot nanny who is coupled up with Dami.

Viewers watched as Jay teamed up with his current partner Ekin-Su, to encourage Dami to go for it with Indiyah and to ditch Amber, after confessing his feelings for the stunning waitress.

Die-hard Love Island fans of the show recalled how Jay confided in fellow bombshell Remi how he would ‘never forget the moment he walked in the villa and his ‘eyes met’ with Amber’s.

Harriette Cole: I finally understand how much he was hurting. Is it too late to say that?