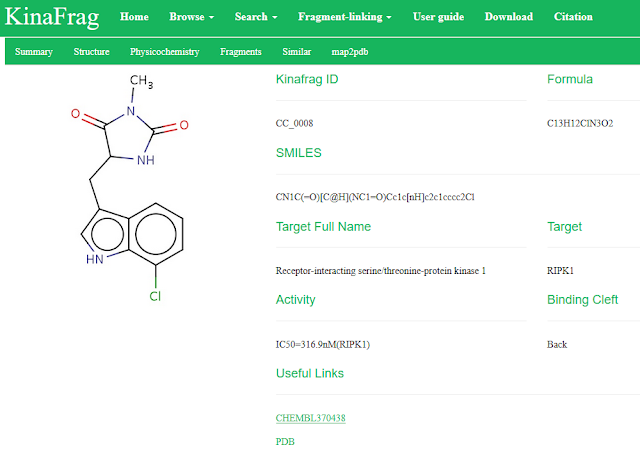 There are some bugs. While I was able to search by physicochemical parameters such as molecular weight and number of hydrogen bond donors, I could not get the substructure search to work. I’d be curious as to whether readers could do so.
To demonstrate the utility of KinaFrag, the researchers describe a case study in which they started with the anticancer drug larotrectinib, which inhibits TRK family kinases. However, the molecule is less effective against several mutations observed in the clinic. Examining the bound structure revealed that the mutations introduce steric clashes. Retaining the hinge-binding fragment while performing virtual screening of fragments from KinaFrag led to molecules such as YT3, potent against both wild type TRKA and two resistance mutants, and further optimization resulted in YT9.

Not only was YT9 active against the wild type and mutant forms of TRKA, it showed good oral bioavailability and pharmacokinetics in rats. Encouragingly, the molecule slowed tumor growth in both wild type and mutant TRKA mouse xenograft models.
One could debate whether this is an example of FBLD; the discovery of YT9 could also be considered a classic case of scaffold hopping. But semantics aside, this is a nice example of thinking in terms of fragmenting molecules. More broadly, KinaFrag looks like a useful tool for work on kinases – especially if the substructure search works.