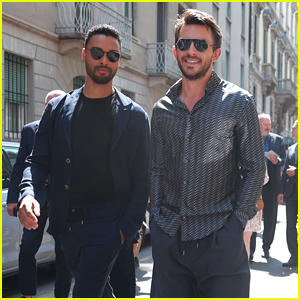 The two Bridgerton stars met up and headed to the Giorgio Armani fashion show together, during the Milan Fashion Week S/S 2023, on Monday afternoon (June 20) in Milan, Italy.

Jonathan and Rege-Jean also met up with Mads Mikkelsen, Emily in Paris‘s Lucas Bravo, Scott Eastwood, basketball star Cole Anthony, and Father of the Bride actor Diego Boneta ahead of the show.

Just a week earlier, Jonathan was spotted at another fashion event, alongside another co-star. Check it out here!

If you missed it, find out what Jonathan‘s co-star Simone Ashley said about what’s ahead for Kate and Anthony on Bridgerton.

Click inside to se 25+ pictures of Rege-Jean Page, Jonathan Bailey, and more at the Giorgio Armani fashion show…

What NYC streets are closed on July 4th?