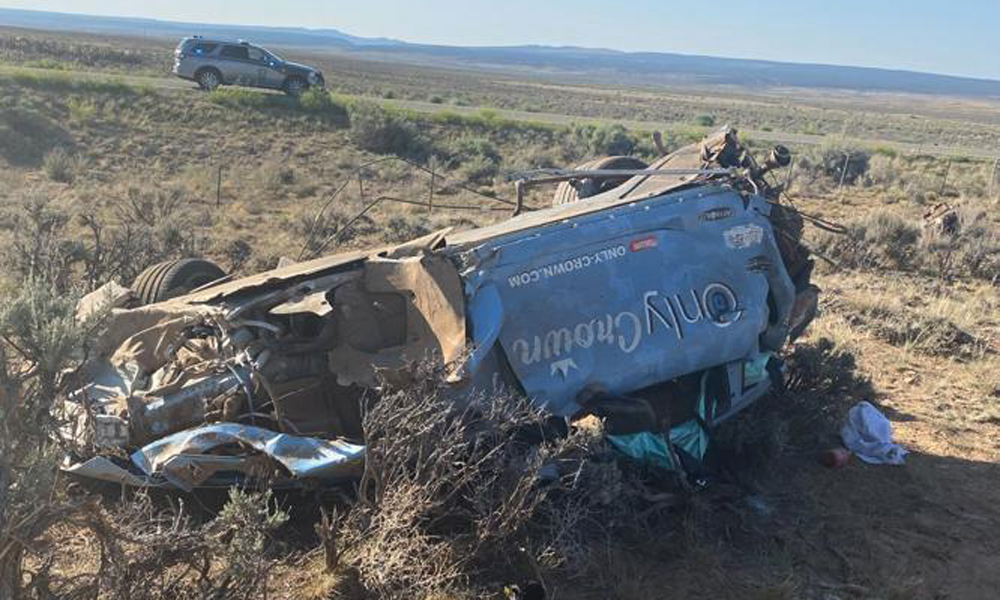 Two men participating in a multi-day car rally were killed when their Porsche flew off a Colorado highway, and the county’s sheriff decried what he called “reckless and intentional disregard” for the area’s residents.

The crash happened Thursday, June 16, on Highway 141 near the community of Naturita, in southwestern Colorado.

A Porsche 911 Turbo reportedly going more than 140 mph left the roadway, hit a fence and flipped over, ejecting the two occupants.

Killed were Larry Chachko, 43, of Northbrook, Ill., and Michael Mroz, 38, of North Barrington, Ill. Chachko was said to have been the driver.

They were participating in Crown Rally West, a five-day, 1,000-mile event that put 100 luxury cars on a route from Denver to Pahrump, Nev.

In a tweet that described the crash as “one of the most horrific traffic accidents responding deputies have ever seen,” San Miguel County Sheriff Bill Masters went on to say, “I am terribly sorry these two men were killed in what was a preventable incident. And I don’t appreciate what amounts to reckless and intentional disregard for the people of our county. They could have killed an innocent motorist. Crown Rally needs to rethink what they’re doing out on the roads.”

The men were on leg 2 of the rally, a roundabout route from Beaver Creek, near Vail, to Santa Fe, N.M.

The speed limit on the two-lane Highway 141 is 55 mph. “It’s not an autobahn. It’s a rural Colorado road. … It’s designed for what the speed limit is,” Masters told the Montrose Press.

The invitation-only rally’s website says the $5,000 entry fee for each pair of drivers covers luxury accommodations, VIP parties, concierge service and the finish-line event Sunday at a private motor sports resort in the Nevada desert. The event also has a fund-raising component that its organizers say has contributed more than $750,000 for various causes over several years.

In a social media post Saturday announcing the deaths of Chachko and Mroz, the rally organizers said: “We will continue our journey and celebrate their lives and all that they have done for others.”

Chachko, who leaves a wife and two children, ran an auto customizing and modification shop in the Chicago area.

Today24.pro
Canelo Alvarez blasts ‘a**hole’ Gennady Golovkin as he prepares for third fight with boxing rival Royals vs. Athletics Friday game thread A 757-acre Scottish island that comes with a mansion and a whale skeleton nicknamed 'Bony Dick' is on sale for just over $2 million Eblen knew he would beat Mousasi at Bellator 282: ‘I expected it’