DUGGAR fans have slammed Jed and Katey for a “dangerous and stupid” parenting move with their newborn son in a new video.

Fans have shared their concern over Jed and Katey leaving their baby basket directly underneath a grill.

They were excited to try out the vehicle with their newborn and meet up with other Duggars for a lunchtime cookout.

As they were prepping the meal, Jed and Katey were showing off Truett in his adorable baby basket to their family.

However, at one point, the baby basket was set directly underneath the grill. 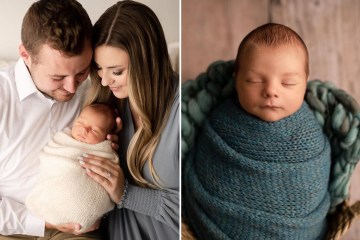 Fans were outraged by the action and circulated a snap from the YouTube video on a forum.

One demanded: “Y’all, why do they have this baby sitting under a grill?”

A second asked: “They couldn’t have found literally anywhere else for the kid to be?”

A third said: “Also, the baby is almost touching / is dangerously close to the propane tank. Jed is also leaning over the baby to reach the grill. Anybody who was around them that day clearly lacks common sense for them not to correct where the baby is.”

A fourth wrote: “Nothing could possibly go wrong here.”

Another observed other Duggar family members there and said: “So, multiple adults saw where this baby was and thought it was fine.”

The baby was eventually moved later in the video; however, fans are unsure if it was Jeremy or Jed.

The former TV stars announced they were expecting their first baby together in September 2021.

Jed and Katey announced on their Instagram that he had arrived in the world with a picture of them and the baby.

“He’s here! We love you so much, baby True!” they captioned the post at the time.

The pair revealed the meaning behind the unusual moniker as well, writing: “Truett: ‘warrior for Christ’

Last month, Jed and Katey shared the first photos of Truett with a behind-the-scenes video of the shoot on their YouTube page.

The video starts out with the camera panning the photography studio.

Tonia Hanson Photography, who took the adorable photos, is filled with pictures on the walls of past shoots and has a beautiful set-up, complete with a couch, clothes, and a huge light for flash.

Katey is seen getting her make-up done for the shoot and then the video moves to Tonia angling True just right for the picture.

A sleeping True is wrapped in a blanket while lying in a basket.

True is then seen dressed in various outfits and placed in different settings like a tiny bed, a chair, and a net.

Jed and Katey also pose with their newborn as part of the snaps.

The Counting On alums posted the photos on their official Instagram page.

“We just got Truett’s newborn photos back and we are so in love!!” they captioned the post.

The couple encouraged their followers to follow the link in their bio for the behind-the-scenes video.

Jed was by Katey’s side during the birth but came under fire after he pointed out the mom-to-be’s eating habits while in the hospital.

In the clip, Katey opened up to her husband about how excited she was to be having a baby.

Jed – who was filming his wife’s reaction – grabbed her hand, encouraging her to show off her manicured nails.

“Show us the nails; [she] just got her nails done,” Jed tells the camera while flashing her polished white fingertips at the lens.

In the background, a voice could be heard that told Katey her meal times.

“You’re all about food!” Jed says.

Fans weren’t impressed with his comments and bashed the ex-reality star.

“Who says that to their pregnant wife, in the process of having said child,” one user wondered.

“Right. That is such a condescending and patronizing gesture,” said another.

The newborn was eventually moved by either Jed or Jeremy, fans couldn’t tell, although they slammed the action as ‘stupid’[/caption] Jed and Katey welcomed their newborn on May 2 of this year[/caption] Jed was under fire for an ‘insensitive’ comment about Katey’s eating habits in the hospital[/caption]

Officials ask people to be 'lake wise' this weekend

Today24.pro
Canadian Wood Council mass timber fire test performed as expected SANDCAST: Deahna Kraft only knows one speed, ‘All in, or nothing at all’ McGregor vs. Masvidal chances heating up Athletics’ Adrian Martinez will get starting assignment in Seattle