THE man accused of beheading his pregnant ex-lover fell from grace as a college-bound athlete to a reviled murder suspect while his mental state rapidly declined, his family said.

After he dropped out, Holloway was “transient” in his his mom’s Litchfield, Illinois home, couldn’t bed “dependably contacted other than his cell phone” and was caught up with a “tough” crew,” Hawk told The Sun.

“He developed this ‘Don’t tread on me attitude,'” Hawk said.

“I mean, especially considering the friends he had from sports, it was strange that he was choosing the kind of more criminal elements than the more sporty, college-bound kids he hung out with in high school. 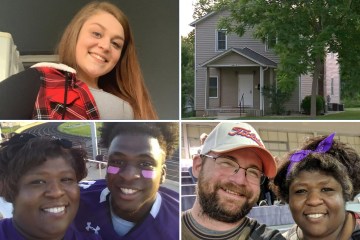 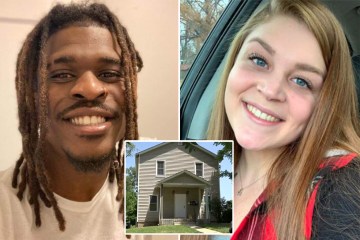 Inside 'killer's' chilling words to mom after 'beheading ex-girlfriend'

Hawk was referring to the mental health struggles that Holloway battled for years before what Hawk described as an unexplained level of violence.

Holloway had struggled for at least three to four years with severe mental issues, including hearing “dark voices” – one of which he named “Ruth” – Hawk said.

The voices impacted every facet of his life, including his job taking drive-thru orders in a fast food joint, according to his stepdad.

“The voices kept going and it was making him too paranoid,” Hawk said.

“He couldn’t even be trusted to take orders from people at the voice box because the voices were telling him that (the customers) were sending messages to him that he shouldn’t be hearing.”

Hawk said he thought his stepson – who they called “Dee” – could get violent but never imagined he would take it as far as law enforcement alleged.

The suspect’s stepdad doesn’t know what drove Holloway over the edge – all he has is speculation – but there were alarming signs over the last four to five years.

Hawk said that he and Holloway’s mom tried to take their son – who they called “Dee” – to a clinic after he dropped out of high school.

But Holloway refused treatment and walked out of the clinic without taking medication after a couple of days, Hawk said.

Dropping out was the start of a rapid descent for “Dee’s” mindstate, and leaving the clinic was the turning point.

“I’m ashamed, and I wish I could go back and try other tactics than we did.”

Hawk said he thought the key was the clinic that they tried about two years before last week’s alleged murder.

But Hawk said his stepson didn’t “want to be caged in,” didn’t want to take the medicine, and left the clinic, which couldn’t hold him.

“I don’t know if there’s anything specifically that I would have done different.

“I think the key thing would have been that time he was (in the clinic).

“If we could have kept him in there long enough to get on his meds and adapt, then I think we would have had a better opportunity of keeping him at our house for a period of time.”

Dodd’s mom found her daughter’s remains in her Alton, Illinois, home on June 9, 2022, and her body was discovered in a nearby dumpster, cops said.

Alton Police Chief Marcos Pulido told reporters that her mom went to check on Dodd when she found her remains.

He said she was “savagely killed,” adding it was “beyond reprehensible.”

Cops revealed that Dodd and Holloway, also 22, dated on and off for around two years.

Holloway has been charged with two counts of first-degree murder and intentional homicide of an unborn child.

He’s also been charged with the dismemberment of a human body, concealment of homicide death, and motor vehicle offenses.

During the interview with The Sun, Hawk was apologetic to Dodd and her family.

Jurgen Klopp: Mo Salah has been ‘the stuff of legend’ and his ‘best years are still to come’ at Liverpool

I woke up in Chris Pincher’s flat to find him on top of me after a night of boozing, alleged victim claims