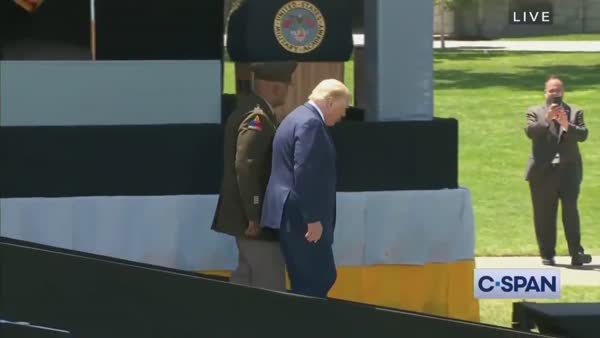 On Saturday, Trump tried to make fun of President Biden, who fell off a bike over the weekend near his Rehoboth Beach vacation home, but the joke is on him.

The NY Times reports, "The president said his foot had gotten caught in a toe clip, which caused him to tip over after coming to a stop. He quickly collected himself and stood up, saying “I’m good” before answering a handful of questions from reporters.

Like a fool, during his Saturday appearance at the American Freedom Tour Trump told his cultists, “I make this pledge to you today, I will never, ever ride a bicycle.”

When has Trump ever been on a bike, let alone ridden one for any length of time?

The 79 year-young Biden is vibrant and in good shape. On the other hand, outside of riding around in his golf cart, Trump exudes vitality like the Crypt Keeper.

And who could forget Trump's million step crawl down a ramp after speaking at West Point?

Trump's decision to once again use members of the military as campaign props may have backfired on him as portions of his speech, and his apparent struggle to make his way down a ramp have led to speculation about his health and fitness to hold office, along with the hashtag #TrumpIsNotWell making it to the top of the list as the top trending topic on Twitter.

Today24.pro
Gaethje getting nose surgery, aiming for ‘one last’ UFC title push Briedis vs Opetaia: Live updates and results, 5 am ET ‘Our strong bond was the most special part’: top-10 Badminton horse dies, aged 25 US tennis player Taylor Fritz pulled off an amazing diving shot at Wimbledon that was so good his opponent had already started celebrating winning the point