The YouTuber in June 2021 took Mayweather the eight-round distance in their Miami exhibition bout.

But Paul later alleged that he was not paid in full by the boxing legend, whose promotional banner staged the bout.

The American has now gone on record, talking on True Geordie’s podcast, to say how much he is allegedly owed.

Paul claimed: “My guess would be between two and five mill, conservatively.”

Mayweather, 45, boasted before and after how he was set to bank $100m, dubbing it “a legalised bank robbery.” 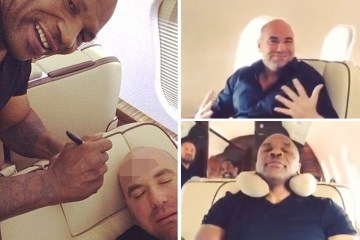 Paul, 27, has said he was paid for the fight but alleged it was not the full purse.

“Technically, yeah you’re right dude, but what about the rest of my money? This will be settled.”

Mayweather recently addressed the allegations and suggested not only had Paul been paid, but he asked for a rematch.

He said in Las Vegas: “He wants part two. Now remember, this is the same guy that said he didn’t get paid.

“So, a lot of times stop listening to all the bulls*** that people [say]. You know, like I say, clout-chasing.

“You know, when you bring Floyd Mayweather name up, you stay relevant. I’m always the reaction. I’m not the action, I’m the reaction.”

Paul was quick to hit back and claimed it was Mayweather’s side who requested a rematch.

He responded: “Let me just set the record straight, why the f*** would I ask for a rematch for someone who doesn’t pay you for the fight?

“If I haven’t been paid for the first one, why on God’s green earth would I ask for a second fight knowing damn well I’m probably not gonna get paid the money that I was owed for my work, you dumbass.

Let me just set the record straight, why the f*** would I ask for a rematch for someone who doesn’t pay you for the fight?

“He was supposed to fight on top of the Burj Al Arab, in Dubai, the seven star hotel with the helipad up top. Would’ve been amazing.

“Someone from his team or someone who at least thought they could get the deal done enough to make us a confidential phone call.

Mayweather was due to box atop of the hotel helipad, 700ft above sea level, on May 14 until it was scrapped ONE DAY beforehand.

Mayweather instead returned a week later in Abu Dhabi and dominated his ex-sparring partner Don Moore over eight rounds.

He has since announced his next exhibition will be against MMA star Mikuru Asakura, 29, in September in Japan.

Meanwhile, Paul is yet to make his boxing return since facing Mayweather, but is in training to fight again.

Logan Paul is training to make his boxing return[/caption]

I’m a wedding planner, the ten mistakes brides make a week before their big day