The pro-dancer, 40, cuddled up to her husband in a revealing bikini after marrying in a secret ceremony earlier this month.

Posing on a Greek beach in a black, crochet bikini, Karen held on to her husband who had his arm around her shoulders as they playfully pretended to bite each other.

In other photos on the Instagram post, Karen showed them playing around in the clear blue sea waters, enjoying cold beers on the beach and even getting ‘stuck’ out in the water on paddle boards.

Karen looked stunning in the barely there bikini as they lapped up the sunny conditions on their ‘mini-moon’.

We laughed. We recharged. We celebrated. We bonded.

“We spent some proper needed quality time together. Here’s to more of these days together

The dancer’s fans loved the update from their holidays. 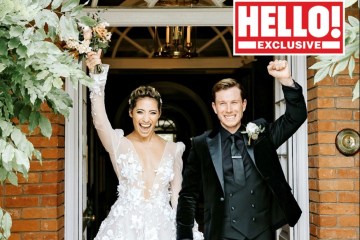 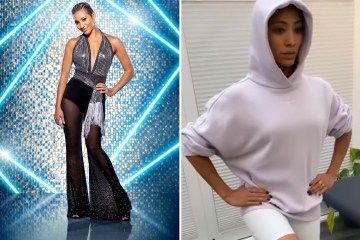 “Aww so cute. Glad you guys had a good time away for your mini moon,” commented one fan.

Another added: “Looks like you have had an amazing time.”

And a third wrote: “So happy for you both.”

They married at the fancy Chewton Glen five-star hotel in Hampshire in front of show pals including Janette Manrara, and Luba Mushtuk.

Karen, 40, told Hello!: “It’s my fairytale dress. It’s something I never thought I’d go for but I knew right away that it was ‘the dress’ when I tried it on. I feel like me in it.”

Adding about the day, she said: “It feels like a fairytale day. It felt so special to bring our families and friends together.

“I haven’t seen my family for the last two years so it’s really touching to bring them here and be able to share this amazing moment with them.”

Jordan – a fitness expert from Australia – only revealed their romance to the world on Instagram in July last year.

In an emotional post he said he was “so lucky” to have met the Strictly Come Dancing star.

He wrote: “32 years… definitely worth all that life could throw at me so that I could have you in my arms.

“How can a donut like me get so lucky to have met my person. Can’t wait to have you home.”

Karen has been married twice before, first to former dance partner Matthew Hauer, and then to fellow Strictly star Kevin Clifton.

Getting pregnant when you’re menopausal

July 4 US flag optical illusion has left viewers scratching their heads – which way do you see the stripes going?

Today24.pro
Athletics’ Adrian Martinez will get starting assignment in Seattle Canadian Wood Council mass timber fire test performed as expected Lonnie Walker to Lakers SANDCAST: Deahna Kraft only knows one speed, ‘All in, or nothing at all’