DUGGAR fans think Joy-Anna is secretly pregnant with her third child after spotting a “baby bump” in a deleted photo.

Joy-Anna, 24, and her husband Austin Forsyth, 28, have been subject to pregnancy rumors for months and fans now think they have spotted a baby bump.

Fans spotted Joy-Anna in the background of a photo reaching up to something on a top shelf.

She has her other hand placed over what fans think is a bump.

Joy-Anna’s fans wonder how far along the star could be in her secret pregnancy.

One speculated on a fan forum: “I’m just going to go ahead and say she’s pregnant. The way she’s holding her belly combined with how she looks in Jed’s RV misadventure. Joy is a really active, somewhat athletic type woman and we’ve seen her not have this leftover baby bump everyone is suddenly claiming she has.” 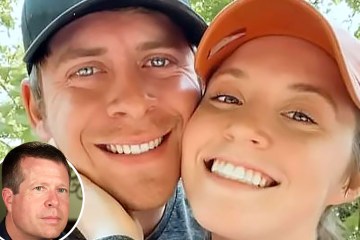 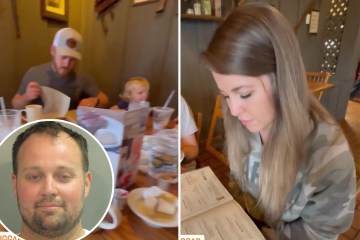 They continued: “We all know that some women don’t lose the baby weight, but by all appearances, Joy isn’t one of them. Check her photos over the past year or so, out with Carlin and various events.

Another chimed in: “Totally looks pregnant to me.”

Yet a fourth added: “She was in Jed’s gender reveal with a visible bump and a post was deleted that revealed she had a baby to protect Siah and Lauren’s desire for privacy.”

Joy-Anna has been sparking baby number three rumors for months.

However, in April, fans were convinced a friend accidentally hinted the third baby is on the way.

The Counting On alum’s friend Carlin Bates fueled speculation after sharing numerous photos from their girls’ weekend together.

The snaps were initially posted to Carlin’s Instagram Story and circulated on fan forums.

One photo showed a close-up of the pair huddled close as they smiled for the camera.

Joy-Anna was dressed casually in a gray tee-shirt, no makeup, and her hair pulled back into a loose bun.

Her friend opted for a white top, her long brunette hair tied in a low braid, and a full face of makeup for the occasion.

The photo seemed to capture the end of the visit as she captioned the post: “So glad I got to spend the weekend with yooou!”

In a second pic, Carlin snapped the mom-of-two from behind as she departed carrying multiple bags of luggage and pushing her youngest child Evelyn, one, in a stroller.

She commended her friend’s multi-tasking in her caption, which read: “She is a super mom.”

Both photos raised suspicions for viewers who noticed Carlin’s careful attempt to shield Joy-Anna’s stomach in the photos.

The original poster wrote: “Joy visited Carlin this weekend, and Carlin shared only a few photos of her, from awfully careful angles…

“And y’all know Carlin usually posts the s**t out of everything. Hiding the bump?”

The thread continued with mixed reviews from fans as some believed another baby could be on the way.

In addition to their daughter Evelyn, Joy-Anna and Austin are also parents to son Gideon, four.

Chatter heightened in March after the TLC alum shared a YouTube video from their family trip to California.

In one part of the video, Joy-Anna and her son raced across the tracks toward a railroad station.

The young mom’s appearance reignited pregnancy theories as some Redditors pointed out a possible baby bump.

One said: “She stops posting altogether, or at least down to very little. So immediately, it’s the signal for pregnancy.”

Another user added: “Well, we know Joy took January off. So, maybe Joy will announce next week.”

A third wrote: “Looks like she’s pregnant. If she’s not, I’m sure she will be soon.”

One person chimed in: “Evy is like a year to almost 2 years old. It’s super possible that she’s pregnant.”

However, one commentator argued: “Nope. To me, it just looks like her tops are layered and have bulked up. Isn’t it winter over there?”

This is not the first time that fans speculated that the star was possibly pregnant.

Back in October 2021, Joy had taken a group photo with her hubby and two children.

The couple posed and stood in an empty field while they each had a child in their arms.

Austin held his son Gideon while his wife took hold of their daughter.

The group smiled for the family portrait while sporting their best Sunday attire.

Fans theorized that the “beautiful family” photo meant that the TV personality might be attempting to “hide a baby bump” with the alleged placement of her daughter covering up her belly.