LOVE Island viewers have claimed that one Islander ‘is being SET UP to be dumped in viewer vote by producers’.

The latest fan theory is that Amber Beckford has been given a bad edit so people vote her out so Dami Hope, 26, can be with Indiyah Polack, 22.

Amber, 24, coupled up with Dami on day one after the public voted for them to be together.

But in recent days it doesn’t seem to be working out for them.

During a chat on Thursday evening, Amber made it clear that she wanted more affection from him, so the next day he made an effort by making her breakfast.

However later in the day Amber explained that she’s been questioning if they’re compatible. 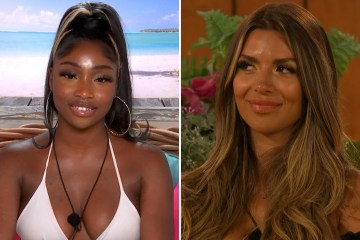 The Love Island make-up trend this year is Gym Lips, here's how to get the look

Then on Friday Love Island fans turned on Amber and branded her a ‘snake’ after she got involved in the Ekin-Su Culculoglu, 27, and Davide Sanclimenti‘s drama.

She told the rest of the Islanders that the Turkish actress smooched bombshell Jay Younger behind Davide’s back.

Others are convinced she’s been given a bad edit to get voted off so Dami can couple up with Indiyah.

Last night the senior microbiologist admitted he has feelings for the hotel waitress.

Viewers were also told that they had to vote for their favourite Islander – and the one with the least amount of votes is at risk of getting dumped.

One fan wrote on Twitter: “Not sure why there’s a sudden switch up on Amber. Everyone on the show has been terrible at some point. I feel she’s been set up to be voted out by the producers #LoveIsland.”

Another said: “loLL listen voting means nothing, I’m sure the producers look at popular tweets and make the decision folks not feeling amber, so they’re setting her up to go… then Dami can do his thing w Indiyah chaosss.”

A third added: “Deep it two dumpings in two days???? Yup the producers know what they’re doing. They want Amber out as well.”

“the producers are SMART! deep it They put all the bad footage of amber to make us dislike her, now they’re pushing this DAMI and indiyah narritive, and putting VOTE for your least liked islander?! So that amber can leave and DAMI and indiyah can be together!,” a fourth said.

A fifth chimed in: “These producers want Amber out so bad #loveisland.”

And it seems like Amber is going to be the centre of a lot of drama tonight as she clashes with Ekin-Su again.

This evening’s instalment of the ITV2 dating show sees Amber tell her what she thinks.

Ekin-Su says: “I was sitting there and he [Jay] was like, I think Amber and Paige don’t like you.”

Amber admits: “I feel like upstairs, you’ve been really genuine and we’ve seen a vulnerable side to you but I will add, over the last couple of days I’ve thought, is she playing a bit of a game?”

“You’re playing a bit of a game, enjoying the drama,” Amber says back.