IT takes a lot of money to smell like your favorite celebrities.

But it turns out, you only need $5 to smell like Kim Kardashian.

In a video, TikToker Timmy Hilton shared that Five Below has dupes of all of the Kim Kardashian West perfume but they will only cost you $5 each.

Plus, several of Kim Kardashian’s perfumes are no longer on the market, so Five Below’s versions make out to be a great alternative.

Hilton also gave his brutally honest reviews of the cheap dupes, with some smelling much better than others.

There was no tester bottle available, so Hilton wasn’t able to try the perfume out for himself, but he did with the next dupe. 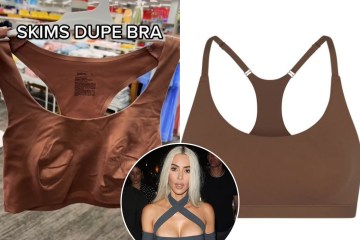 Hilton then showed off the Kimberly Diamond perfume, which he said: “Kinda smelt really terrible.”

Hilton remarked: “It did not smell anything like the original fragrance.”

The TikToker also shared Kimberly’s Sinful Berry and Kimberly from Five Below.

Overall, Hilton didn’t seem too impressed by the Kim Kardashian dupes and said of Five Below: “A for effort.”

He also wrote in the comments: “Bottles are cute and all but the smell is straight chemicals.”

Other people took to the comments section to give their honest reviews of the cheap fragrances.

One wrote: “I get compliments on the pineapple one all the time, I love that one!”

Another added: “They do a great job with the bottles and packaging but I always think they all smell horrible.”

“No cause I wore the pineapple one on a date and they were obsessed with the smell,” a third comment read.

Someone else commented: “I smelled the chocolate strawberry one and it was interesting.”

Report: Tottenham getting frustrated with European club over sale negotiations