JARRELL MILLER will return to the ring this week as part of a ‘KO Drugs’ festival just after his ban expires.

The Brooklyn heavyweight is set to return for the first time since November 2018 after a series of failed drugs tests.

He has been sparring with Tyson Fury recently[/caption]

And he now has a confirmed opponent for his bout this week as part of a WBA series to ‘KO Drugs’.

He was due to face former world champion Anthony Joshua in 2019 at Madison Square Garden before Andy Ruiz Jr stepped in.

Miller has recently been in the UK to spar with Tyson Fury ahead of his win over Dillian Whyte. 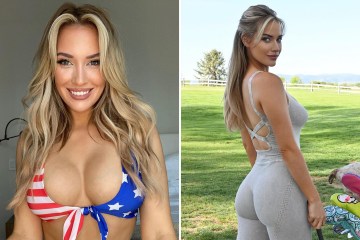 Another separate drug bust a year later has kept the former kickboxer sidelined and serving a backdated two-year suspension.

But the Nevada State Athletic Commission has voted to re-licence Miller as of June 17, so long as he continues to return clean tests.

Miller, 33, blamed his failed test before fighting Joshua, 32, on a tainted supplement and stem cell shots in his elbow.

The heavyweight would in 2020 then get a contract with Bob Arum’s Top Rank stable but again tested positive for a banned substance.

This time Miller put it down to a SEX PILL.

His drugs ban ended on June 16, meaning he is now free to box again.

Miller was due to be part of a Triller fight club event on Saturday night, but now will box in Argentina instead.

The WBA announced a two-event festival for this week in Buenos Aires to tackle drugs.

Miller will be on the undercard on Thursday when Argentine prospect Mirco Cuello faces Venezuelan Leonardo Padilla for the WBA international featherweight title.