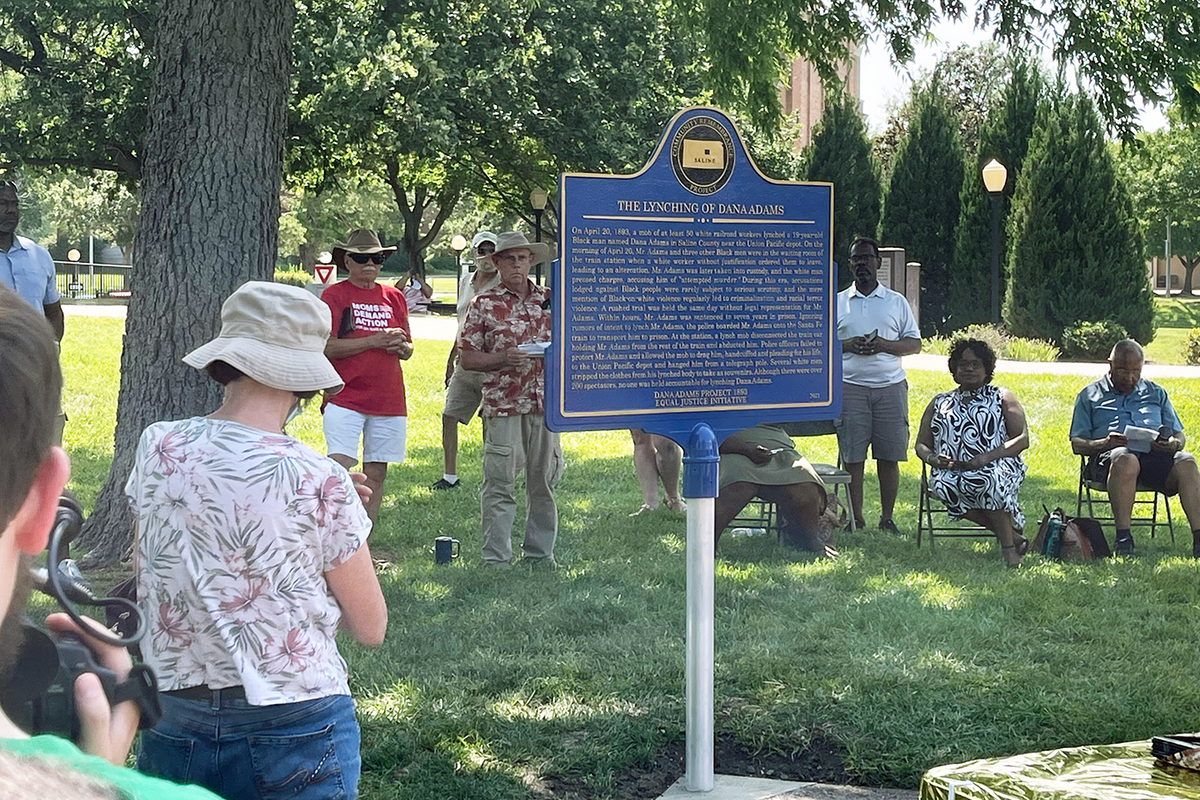 Time doesn’t heal all wounds.
Some wounds fester and spread, inflaming and weakening surrounding tissues. Over time, some of these wounds prove fatal.

On Saturday afternoon in Salina, under a sweltering sun, more than 100 community members gathered to bind and disinfect a very old wound. On April 20, 1893, a Black man named Dana Adams was lynched there, one of at least 23 Black Kansans lynched between 1865 and 1950. His father later sued the city and received two dollars. A plaque detailing the lynching was being unveiled to remember him, to remind Salina of a past that all must understand to overcome.

“We all need to be part of this healing process. We don’t have one soul to spare, not one,” said Sandy Beverly, one of the three women whose vision and dedication made the marker — located in Robert Caldwell Plaza, between the public library and city-county building — a reality.

Or as Salina Mayor Trent Davis put it during his welcome to the crowd: “This marker commemorates a very sad, horrendous event. It is a reminder of the biblical sinking sand foundation of slavery and resentment upon which this country was built. As a historical marker, it should be an uncomfortable place to stand and ponder. … Yet as a historical marker, it can serve as the second cornerstone as this little piece of America seeks to rebuild its foundation.”

Folks gathered in the late June heat listened quietly. They had just enjoyed a barbecue lunch from North Salina Community Development, and the most powerful words of the afternoon were still to come.

I drove to Salina on Saturday to follow up on my column from October (my predecessor, C.J. Janovy, had written our first piece on the subject back in 2020).

The soil collection ceremony held then by The Dana Adams Project 1893 and the Equal Justice Initiative was an example, I wrote, of how a small city in the center of Kansas could grapple honestly with its history – as the rest of the nation tore itself apart.

This marker dedication was no less an example, but as the speeches proceeded, it also challenged the audience. In a passionate and exceptional central speech by Sheryl Wilson, director of the Newton-based Kansas Institute For Peace and Conflict Resolution. She talked about how trauma can be handed down through generations, how the death of one man in Salina scarred his family and wove tendrils of fear and sadness throughout the community.

“The trauma affiliated with how we transcend beyond what some other group of people might think we’re worth is something that we constantly have had to negotiate or renegotiate throughout the generations,” she said. “The trauma people deal with today is rooted in the knowledge of their perceived worth. That, on some scale, still is, as I said, something we’re having to deal with today.”

Yes, the marker shows a community coming to grips with its past. But the person-to-person work of rooting out entrenched bias and atoning for past wrongs remains. Columnist Mark McCormick wrote Sunday in Kansas Reflector about the economic damage done to Black communities by discrimination.

The emotional damage has been no less extreme.

“People want to know that they’re treated fairly and equitably in their communities,” Wilson said. “And so when we think about how that at that time, justice was absent, terror rained. And it’s exactly what Black people experienced in this community — a reign of terror. The assets of justice meant that anxiety is the norm for people who don’t have that luxury of feeling safe, and even expressing the norm of calm.”

I spoke with Wilson after the unveiling and asked what it meant to her to be invited to speak.

“It meant everything,” she said, connecting the story of Adams to critical work in restorative justice.

She had explained the concept earlier to the crowd.

“What restorative justice teaches us in this instance, is to look at the ways we can seek to repair the historical harm that has happened here, thinking about how we can reveal a story that was suppressed,” Wilson said. Ultimately, Saturday was a way “that we would work toward healing a community of people who have suffered generationally. That we would offer to give space to people to have meaningful, productive dialogue on how the community can come together, looking at ways to make all boats rise.”

Wilson’s remarks challenged those in attendance to go further than condemning a long-ago act of violence. They also needed work to make change in the present. She told me that in some towns, residents knew the perpetrators of long-ago racial violence but kept quiet.

“Communities live with that dissonance,” she said.

It’s not just communities, of course. States and nations do as well.

As I drove home that evening, I pondered the event. Beverly, along with the Rev. Delores “Dee” Williamston and the Rev. Martha Murchison, had created a profound moment for Salina, along with a lasting memorial. When the covering was taken off the marker, the crowd pressed forward, looking at the text on both sides and taking picture after picture. I hoped it would be remembered and commemorated the way they intended, a story long told and inspiring change for decades to come.

I also kept thinking about generational trauma. I turned the concept over in my mind, considering it from multiple angles. If we accept that Black communities have suffered long-lasting, entrenched damage done to them by a racist society, what about the harms that we inflict on people today?

What about the Black students and teachers, educators and learners across the board, targeted by bogus claims of critical race theory and ideological indoctrination? Think about how many years that pain and shame will linger, simply because white politicians sought to use racism to score political points.

What about LGBTQ folks across society, now being slandered by so-called activists and facing death threats for expressing their pride in themselves? What about transgender students navigating schools in which their very identity has become a political lightning rod? Think about the trauma caused for them, for the same shameful political ends.

In 100 years or more, imagine the descendants of these politicians and activists gathering on a sunny day in a green park to atone for the shame their ancestors brought our state and its communities.

Imagine their words of apology to those who suffered through decades of trauma caused by others attacking the color of their skin, who they loved, how they dressed and identified.

We shouldn’t have to wait a century. I shook my head.

Yet I thought back to the hard-won optimism of Beverly.

“I know that our work is not done,” she told the crowd that afternoon, a day before Juneteenth. “We have more work to do. But if those of us collectively here can join our power, our strength and our positivity together, we can get things done.”

Today24.pro
A 757-acre Scottish island that comes with a mansion and a whale skeleton nicknamed 'Bony Dick' is on sale for just over $2 million Canelo Alvarez blasts ‘a**hole’ Gennady Golovkin as he prepares for third fight with boxing rival Royals vs. Athletics Friday game thread Eblen knew he would beat Mousasi at Bellator 282: ‘I expected it’