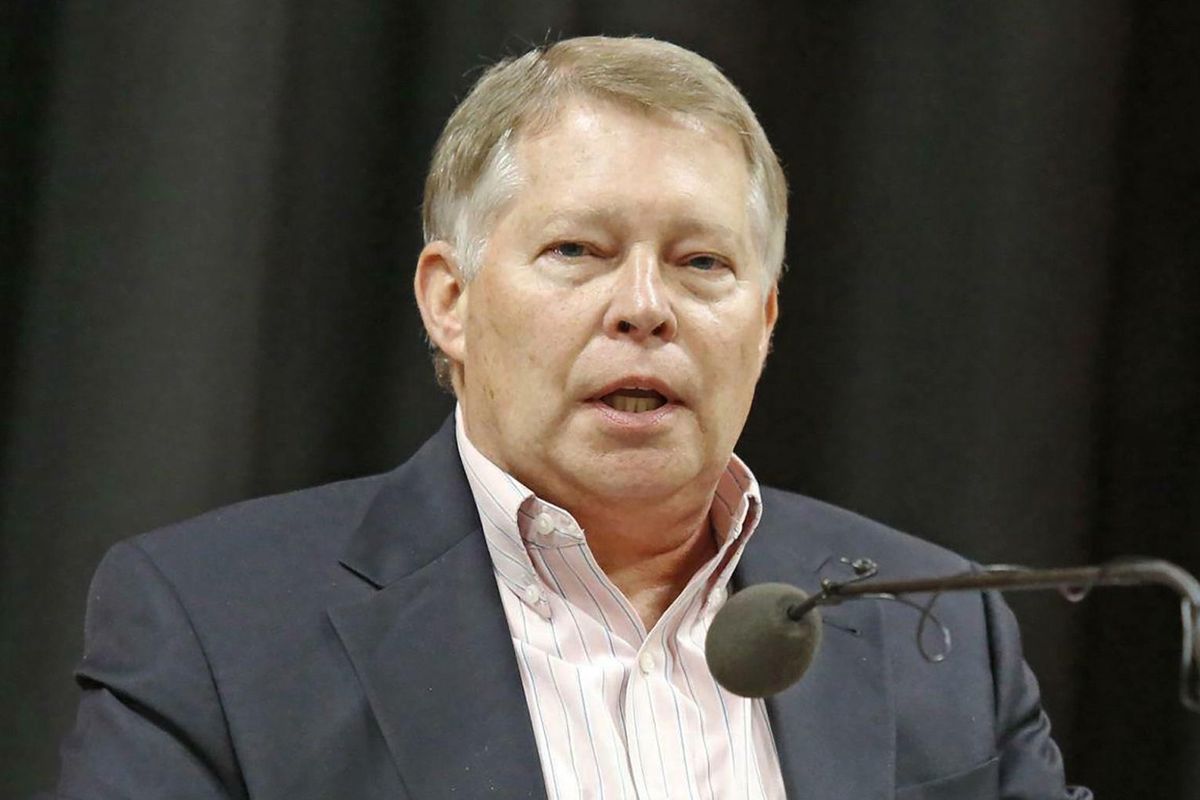 As the Jan. 6 committee’s hearings pass their halfway point, they have brought new details to light that explain the events of the attack on the Capitol and place them in context of a larger effort to overturn the 2020 presidential election.

In the first hearing, Committee Vice Chair Liz Cheney previewed the committee’s case that President Donald Trump committed a crime when he alleged widespread voter fraud and encouraged his supporters to contest the 2020 election. The second hearing demonstrated that Trump was repeatedly told by his own advisers his claims were false. The committee used the third hearing to focus on an illegal and unconstitutional plan to block the certification of Joe Biden as president.

The evidence presented in the proceedings – including surveillance footage of the violence as a mob assaulted Capitol police officers – has led to discussions across the country and around the globe about the U.S. democratic system of governance.

While coverage tends to focus on all that went wrong during the transition of presidential power, the hearings also showcased much of what went right. Namely, a widespread and profound commitment to the rule of law by a range of citizens and officials, from the vice president to Trump administration staffers to outside advisers. 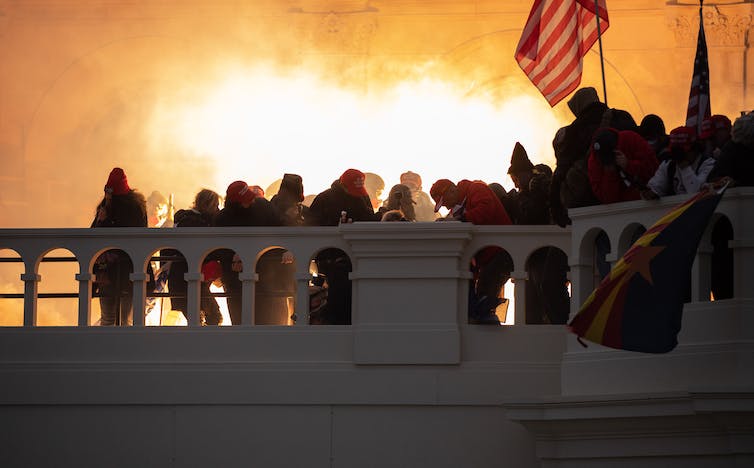 The House Jan. 6 committee hearings are focusing on the events that led up to the storming of the U.S. Capitol by Trump supporters.

Understandably, much of the attention on the hearings has centered on the actions of President Trump in the lead-up to Jan. 6. Other media coverage has focused on the members of Congress who are serving on the committee.

But as a scholar of congressional oversight, I believe that among the real stars of the three hearings are the talented – and largely unrecognized – teams of staffers who worked to obtain the evidence presented in the hearings. Often underpaid, these individuals are committed to making government work.

And their efforts uncovered people across all three branches of government with a similar commitment to upholding the Constitution and the rule of law.

The second hearing revealed that campaign professionals, Justice Department officials, and even political appointees selected by President Trump tried to stop him from making false claims about the 2020 election.

That hearing also emphasized that, out of the 62 lawsuits filed challenging the results of the presidential election, 61 have failed. These decisions came from judges who were appointed by both Democrats and Republicans, including President Trump himself.

As committee Chair Bennie Thompson said to witnesses J. Michael Luttig, a conservative icon and adviser to Vice President Mike Pence, and Greg Jacob, legal counsel to Pence in the third hearing, he was mindful that “our system nearly failed and our democratic foundation destroyed, but for people like you.”

Much of the public discussion leading up to the Jan. 6 hearings centered around the refusal of President Trump and his allies to provide information to the committee.

Among those who complied with congressional requests for information are the president’s own family and members of Pence’s inner circle. 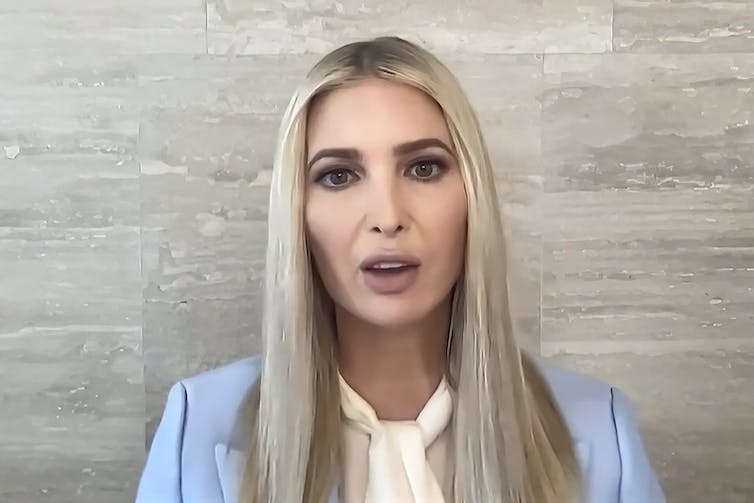 Ivanka Trump, the former president’s daughter who served him as a senior adviser, provided testimony to the House Jan. 6 committee.

There have been many contested elections and presidential scandals throughout history.

Thomas Jefferson and Aaron Burr’s infamous fight for the presidency in 1800 and the “corrupt bargain” that made John Quincy Adams president in 1824 illustrate the anger and divisiveness that can accompany elections. And the bribery scandal involving President Warren Harding, coupled with President Richard Nixon’s implication in Watergate, highlights the political stakes of the presidency.

In response, legally mandated procedures have regulated the transition of power from one president to the next.

One of the most important pieces of this legal framework is the Electoral Count Act. Enacted by Congress in 1887, the law specifies exactly how Congress certifies presidential elections.

Passage of the act was the result of a partisan battle over who won the 1876 presidential election between Republican Rutherford B. Hayes and Democrat Samuel J. Tilden. The electoral votes of four states were disputed, and Congress ultimately established a commission to determine the next president.

It is the only time in history that an extraconstitutional arrangement led to Congress’ deciding a presidential election.

The June 16 hearing provided evidence of disagreements within the Trump administration over interpretation of these laws.

Yet almost everyone accepted the laws themselves. Even John Eastman, the lawyer at the center of Trump’s legal strategy, recognized that the plan to block certification of the election would not hold up in court. 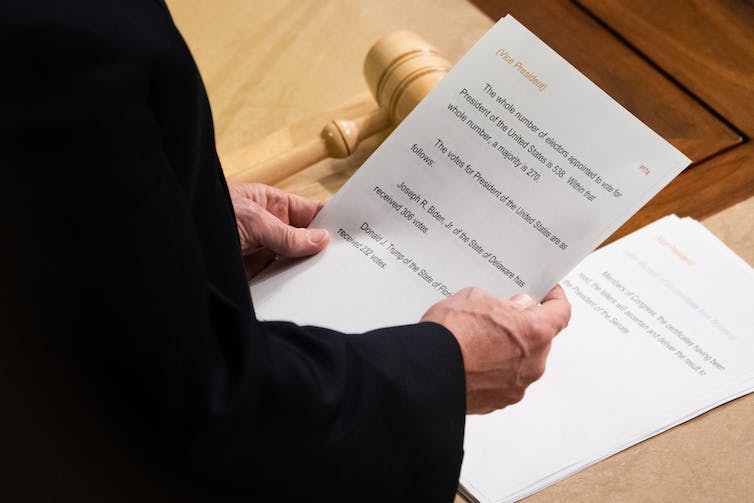 Vice President Mike Pence reads the final electoral vote counts declaring Joe Biden as the next U.S. president during a joint session of Congress, early on Jan. 7, 2021, after supporters of President Trump had stormed the U.S. Capitol.

The framers of the U.S. Constitution struggled with making presidential power compatible with the values of the republic. Ultimately, the framers agreed that the ingredients for a successful democracy required presidents to be held personally responsible for their behavior in office.

At least 20 million people watched the first night of the hearings, which is on par with the ratings for Sunday Night Football or the Macy’s Thanksgiving Day Parade. Many more saw excerpts of testimony or statements on social media.

While the rioters on Jan. 6 shouted through the halls of Congress about taking back the power of the people, their insurrection failed. Instead, the men and women helping the Jan. 6 committee understand what went on that day are quietly, insistently, reminding Americans of the bedrock values of their republic. The framers’ vision of our democracy echoes today.

How to get a personalized 'Stranger Things' playlist on Spotify, filled with songs to help you escape the Upside Down

Today24.pro
Christian Thun faces Curtis Harper on July 9 ProBoxTV card in Florida Lonnie Walker to Lakers Canadian Wood Council mass timber fire test performed as expected SANDCAST: Deahna Kraft only knows one speed, ‘All in, or nothing at all’