LOVE Island bombshell Danica Taylor has already made waves in the Spanish villa, but let’s have a look at her chic Leicester home.

The 21-year-old dancer is the latest bombshell to arrive on the hit ITV reality show and caused chaos when she picked Luca Bish during the recoupling.

Danica lives in a stunning all-white home in Leicester that she regularly shows off to her 25,100 Instagram followers.

The influencer regularly poses on the white with grey vein marble kitchen counter tops as she shows off the threads she’s picked up in her multiple brand deals.

The kitchen sits in an open plan setup alongside a casual living room, which get plenty of natural light thanks to the floor to ceiling bifold doors.

A huge plasma TV sits on the wall, which will be the perfect spot for Danica to rewatch herself on Love Island, whenever her time in the villa might come to an end.

A mezzanine level sits above the open plan room, giving extra space to the house. 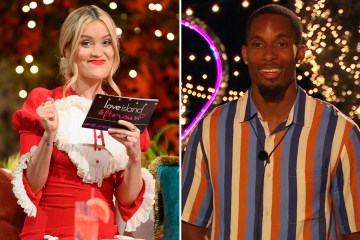 The dancer has stuck to the colour blocking theme throughout the house, including in the bathroom, which boasts matte black faucets and features.

Danica regularly poses in lingerie in her bathroom, which she has styled with a thick cream white shower curtain.

Her cosy bedroom includes a huge walk-in wardrobe, white cabinets and a light up mirror.

Designer bags can be seen around the space which leads to her bedroom, and more white drawers to store her multitude of stylish clothes.

Danica’s bed sits on a white iron-wrought frame with a cosy looking duvet.

Danica also has a silver edged mirrored chest of drawers in her room, on top of which sits a beaded glass lamp, and matches the lamp on her bedside table.

The 21-year-old arrived on the ITV show in a giant pink clam during a sea-themed challenge.

Shortly after, she announced a re-coupling at the end of the episode.

“Tonight, there will be a recoupling. The girls will each choose which boy they want to couple up with.”

All eyes were on Danica on Sunday night as she was given first pick in the recoupling, and made her decision to swipe Luca.

Danica said: “I’ve decided to couple up with this boy.

“I’ve not been here 24 hrs so it is a weird situation to be in, and I’ve barely got to know any of you.

“You’re all lovely boys but I didn’t come here to play it safe. I can only follow my heart, I can only go on face value.

“Someone that is my type. And I need to explore that unfortunately, so I’m going to have to follow my heart on that one.

“The boy I want to couple up with is Luca.”

Before she entered the villa, Danica warned: “I am definitely going to go in there and step on a few toes, and I am more than happy to go after what I want.

“I don’t really see competition, I am a very self assured girl, I know myself, I know what I bring to the table and there are stunning girls in that Villa but I back myself.

“There’s obviously going to be competition but I have no fear that I won’t be able to turn heads.”

Her modern house includes all white finishings[/caption] And matte charcoal cabinets and faucets[/caption] The 21-year-old dancer regularly uses her home as the perfect place for photoshoots[/caption] Danica caused a wave in the Love Island villa during a dramatic recoupling[/caption] She chose to couple up with Luca Bish, taking him away from Gemma Owen[/caption]

Dramatic video shows ship breaking up after being hit by a typhoon in the South China Sea, 27 crew missing

Today24.pro
‘Our strong bond was the most special part’: top-10 Badminton horse dies, aged 25 Briedis vs Opetaia: Live updates and results, 5 am ET Gaethje getting nose surgery, aiming for ‘one last’ UFC title push US tennis player Taylor Fritz pulled off an amazing diving shot at Wimbledon that was so good his opponent had already started celebrating winning the point