LOVE Island’s Casa Amor is famously chaotic and full of drama as the original contestants are introduced to a fresh batch of attractive and flirty singletons.

Show hall of famer Ovie Soko, 31, used his laid-back cool to successfully navigate the pitfalls of the second villa when he joined as a late arrival back in series five.

He became a firm favourite with fans who fell for his bucket hats, beach shirts and relaxed demeanour.

That popularity saw him finish in third place with model India Reynolds, becoming a meme sensation along the way.

The professional basketball star has zero regrets about his time on the show, instead he feels privileged to have been given the opportunity.

With a new look Casa Amor around the corner, Ovie has just one piece of advice: be yourself. 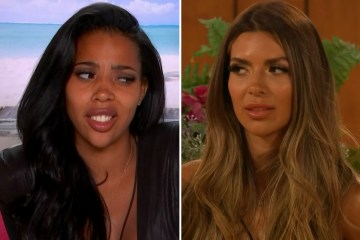 “I don’t think the key is trying to manufacture a tactic. The public can see through that, they’ve seen enough islanders by now. I don’t think faking it will get you far.”

Tension and paranoia are rife during the Casa Amar shake-up as the established female and male islanders are split into two camps and forced to mingle with potential new partners.

However, Ovie insists he never viewed it as a competition, possibly because as a newcomer he didn’t know any different.

“You go into there and people warm to you or they don’t,” he said. “Some people will have made up their minds that they’re at a point they’re comfortable, and that’s what they’ll be. Other people will take a different approach and maybe try and see what you’re about. It depends on who’s compatible. I really don’t think there’s much that can get in the way of two people who properly feel a connection.

“When I got there I was nervous being in a different environment, not being used to anything, but once those nerves wear off.

“I don’t think it was like a competition, maybe it felt that way for the islanders who have been there already. The newcomers are coming into a situation that’s all we know, so we’re enjoying the situation.”

Since leaving the villa, Ovie has thrown himself back into basketball, playing in London, France and most recently Japan.

He’s also collaborated with brands, and his easy-going nature makes him a natural fit for coconut water brand Vita Coco’s Impossible to Hate campaign, which celebrates the good things in life.

So what are the things Ovie just can’t hate?

“I feel like sunshine. I feel like the summer is extremely impossible to hate, especially in the UK because the weather can treat us badly sometimes. And a fresh hairdo, It just makes you feel good about yourself, give you a a little boost, a combination of those things then you’ve won the lottery.

“There are things that irritate me like all of us but generally I try to see the right perspective on situations, and just try and do things the best way I can with the best attitude.”

How to Actually Achieve Your Money Goals This Financial Year

Today24.pro
US tennis player Taylor Fritz pulled off an amazing diving shot at Wimbledon that was so good his opponent had already started celebrating winning the point ‘Our strong bond was the most special part’: top-10 Badminton horse dies, aged 25 The Untold Story Of Chris Hemsworth UConn lands 4-star shooting guard Solo Ball