THE summer transfer window provides clubs with the biggest opportunity to bolster their squads – and it is less than ONE month away.

Erling Haaland’s mega money move to Manchester City has set the tone for one of the most exciting football times of the year.

And more big deals are set to follow with the likes of Kylian Mbappe and Paul Pogba out of contract in June.

In 2021, the Premier League and EFL’s summer transfer window opened on June 9 and it ran for 12 weeks closing on August 31 matching the rest of Europe.

But this year, the window opens on Friday, June 10, however, most international deals will not go through until Friday, July 1.

The transfer market will then run until 11pm on Thursday, September 1. 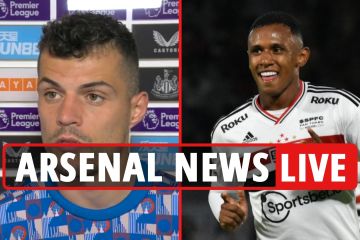 Italy are expected to open their summer transfer period on June 10 in line with England, and stop negotiations from going through on September 1 – before the start of the new season.

In unison with Italy, Spain are also expected to open their summer transfer window on June 10 and close on September 1.

However, clubs still have the ability to sign a free agent and loan/sell players to leagues where the market is still active.

The Germans are also looking to operate with the same transfer dates as Italy and Spain; opening on June 10 and closing on September 1.

Most read in Bundesliga

FIT FOR A PRINCE

Naseem Hamed pictured near Windsor after renting £1.4m house next to Queen

Ex-Emmerdale actor Adam Thomas signs up for this year's Strictly

It might be last time I feel the rain so I’m embracing it, says Deborah James

France will follow suit with the English leagues by opening its window on June 10 and letting it run on until September 1.

The Major League Soccer’s transfer period is significantly different to the other leagues.

Instead of having a January winter window, the governing bodies have chosen to have two windows within the time frame of March and August.

Usually, the MLS primary window opens from February, 10 and closes on May, 4.

However, in 2021, their preseason and opening day of April, 17 was delayed which meant that the primary transfer window opened from March 10 and closed on June 1.

Thankfully, their plans for the secondary transfer window remained the same opening on July 7 and closing on August 5.

And this years primary one has gone to plan because it is currently open now and will close on May 4.