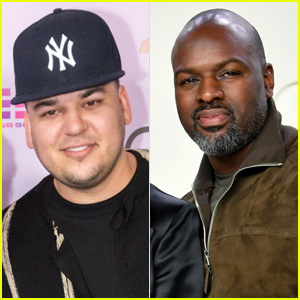 Corey Gamble is taking the stand.

On Tuesday (April 26), the reality star testified in the ongoing legal battle with the Kardashian-Jenner family and Blac Chyna, recounting an alleged fight between Rob Kardashian and Chyna in 2016.

Corey told the jury that he had driven over to the couple’s house and when he arrived, Chyna had something “like a rod” in her hand. He claimed she dropped the object, at which point she grabbed a phone cord that was on the floor and “whipped the cord at Rob.”

He went on to say that when she allegedly began striking Rob, “that’s when I got between the both of them.” According to Corey, Chyna was by the entrance to the bedroom and Rob was by the living room.

“I was worried about Rob,” he said, noting that he looked “scared.” Corey also claimed that he saw “red marks around [Rob's] neck area. His ear and neck were red.”

He shared that he wanted to get Chyna “in a space so [Rob] could get his keys. I didn’t want anything to happen to him.”

He also said he was “keeping an eye on Chyna” as Rob tried to leave. “She was obviously very angry,” he testified. “She wanted to fight him.”

Corey also recalled a gingerbread house that had been “smashed all over the floor,” as well as other destroyed Christmas decorations. “It was a mess everywhere,” he said. “You could tell they were being hostile. Anger going on.”

He said that his car was blocking in Rob‘s, so he quickly had to move it. Chyna allegedly threw a chair at the car as he was driving off and was about to toss a patio table when Corey says he stopped her.

He claimed Chyna was “very angry and intoxicated. I could smell the alcohol.”

Corey hid Chyna‘s keys so that she couldn’t follow him and when he tried to talk to her, she said she “hated” Rob and “wouldn’t like this fat f—– if he wasn’t part of this family.”

“December 15 the relationship was over. He needed to focus on being a great dad. I grew up around that kind of behavior, it reminded me of everything, I let him know this is not going to stop,” he added.

Corey said that while he had heard of other alleged disputes between the pair, this was the first time he had witnessed it himself.

Chyna is currently embroiled in a $100 million lawsuit against members of the Kardashian-Jenner family in connection to the cancellation of her E! reality series Rob and Chyna. The Kardashian family recently requested that the lawsuit be thrown out.

Piers Morgan tells Trump, Jr. who his dad should fire 'if he wants any chance of winning again'