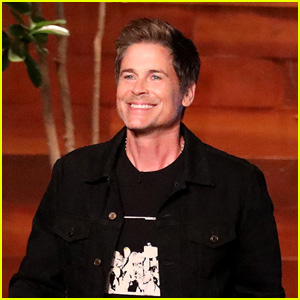 Rob Lowe is opening up about family life, and their game show skills.

The 58-year-old 9-1-1: Lone Star actor made an appearance on The Ellen DeGeneres Show on Wednesday (April 27).

During his appearance, Rob opened up about why he cares “deeply” about getting older, and explained how his son’s Internet trolling led to them getting their own Netflix series.

He also revealed details about how he managed to give his wife Sheryl Berkoff a Family Feud surprise for her 60th birthday.

“My wife is impossible to surprise…I managed to get her all the way to the set, and we played for her birthday, Celebrity Family Feud. And we won because of her,” he said.

“We were so bad as a family, other than her, that we were down 247 to nothing. We never touched the buzzer, not once. We ended up winning the whole thing,” he amusingly continued.

“I was very angry because I’m very competitive.”

If you didn’t already know, Rob Lowe and his brother Chad are sharing the screen! His real-life brother is set to play his sibling in a show. Get all the details!

Shortage of paper for election materials has some jurisdictions scrambling