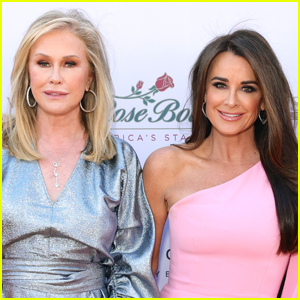 Kathy Hilton is opening up about her relationship with sister Kyle Richards.

It seemed like the pair were on the outs in the recently released trailer for Real Housewives of Beverly Hills season 12.

“I feel you hate me or something,” a tearful Kyle told Kathy in a conversation mediated by Lisa Rinna.

Kathy discussed the situation in an interview with E! News.

“You know, we’re sisters and we all enjoy each other when we’re together,” she shared. “I don’t want to give away the storyline. I should have never said anything to anyone about my sister Kyle, or anyone.”

She also addressed where she stands with Lisa, saying that they were still “friendly.” Kathy added, “I should not have said anything.”

As for whether she’d be present to discuss all the drama from this season at the reunion this year, Kathy said, “You better believe it! Oh yeah!”

She also brought up her current relationships with some of her other cast members, noting that she often hangs out with co-star Garcelle Beauvais.

“I just think she is such an elegant sweetheart,” she said, explaining that she knew Garcelle from their involvement with the Race to Erase MS organization. “We’re both working on that committee and we see each other socially and bump into each other a lot. And we already knew each other. And so that was comfortable for me on the show and at least knowing an extra person.”

Erika Jayne recently spoke out about the cast’s explosive trip to Aspen this season, admitting she felt “regretful” about her behavior.

How will Bulgarians Pay and Vote Electronically in the Future