TACLOBAN CITY, Philippines – Presidential candidate Manny Pacquiao hits back at critics who questioned what he had to show as he aspired to be the next president of the Philippines.

(I tell you, the thieves in government want to bring me down. They say, “What have you done?” I give away homes. Thousands of people have benefitted from it.) 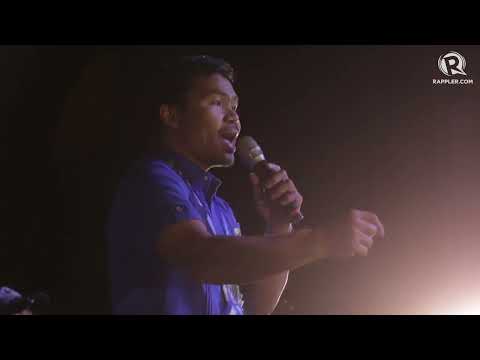 Pacquiao has been giving away free homes in the so-called “Pacman Village” with his own money.

On Wednesday, he said that he went to Tacloban City in the aftermath of Super Typhoon Yolanda. He added that he sympathized with those who were affected, as he remembered the times he was homeless as he slept in a tent during his visit.

He said he gave millions to Taclobanons to help them rise up.

In his speech, Pacquiao said that he wanted his generosity to be his legacy.

(Even outside the ring, I want to put up, to establish, that the legacy of Manny Pacquiao is helping others.)

Organizers said that as many as 30,000 people attended the rally at RTR Plaza in Tacloban City. The venue, which has a capacity of 25,000, was visibly full of people who waited since the afternoon for Pacquiao to arrive.

Tacloban City is the home region of Marcos matriarch Imelda. Pacquiao did not pay a courtesy call to the Romualdez clan while he was in Tacloban.

On Tuesday, April 26, Pacquiao went around Samar Island to visit Catarman in Northern Samar and Calbayog and Catbalogan. He went to Borangan in Eastern Samar on Wednesday before a four-hour drive to Leyte.

During the media interview, Pacquiao thanked his supporters in the region for the warm welcome, even if the local officials governing these areas had already endorsed survey front runners Marcos Jr. and Vice President Leni Robredo.

“Nagpapasalamat at di ko makakalimutan ang pagkakataon na yan. (I am very thankful and I will not forget those moments),” he said.

“Kahit na inendorso sila ng mga nasa position, hindi naman ako nababahala dahil alam ko yung mga mahihirap kasama ko. (Even if those in local positions already endorsed somebody elese, I am undaunted because I know that the poor are with me),” he added.

He is set to complete his trip around Eastern Visayas on Friday, April 29. – Rappler.com