Denny Hamlin should have known better.

One of NASCAR’s highest profile drivers — a 41-year-old three-time Daytona 500 winner and 23XI Racing team co-owner — should have known not to tweet a racist, anti-Asian meme.

Even if it was his attempt to poke fun at his friend and competitor, Kyle Larson, who ignited a wreck Sunday at Talladega Superspeedway that collected the two 23XI cars, a racist joke emphasizing harmful anti-Asian-American stereotypes is unacceptable.

On the last lap of the GEICO 500, Larson was running near the front and moved multiple lanes up the track to try to steal the lead and victory. In the process, he made contact with Kurt Busch’s car, and as Busch bounced off the outside wall and came back into traffic, he hit Bubba Wallace, ruining both 23XI cars’ chances of a strong finish. That’s racing; it happens.

Monday, Hamlin tried to poke fun at Larson, seemingly without thinking about the destructive effects of racist jokes that uphold dehumanizing stereotypes. He tweeted a meme: A clip from Family Guy, a show no stranger to racist and misogynistic jokes, upholding an ugly stereotype about Asian-American women not being able to drive well. To make matters worse, the clip features a character — Hamlin’s meme superimposed Larson’s name over her — with heavily stereotyped accent.

Hamlin could have used any meme, any joke to tease Larson — who is half Japanese and the only Asian-American full-time driver in the NASCAR Cup Series — about his last-lap incident. The internet is abundant with meme choices that don’t target already marginalized groups of people, and he could have chosen any one of those to tease his buddy.

Had he tweeted a meme that wasn’t inherently racist and simply made an innocuous joke about Larson, it probably would have been fine. But he employed an already malevolent and demeaning punchline to make his point, and that’s the problem.

Later that night, Hamlin deleted the tweet and apologized — though he should have further explained why it’s offensive.

But some in the NASCAR world, like FOX Sports’ Mike Joy, and fans still missed why this was so horribly offensive and that there were, in fact, racial implications. 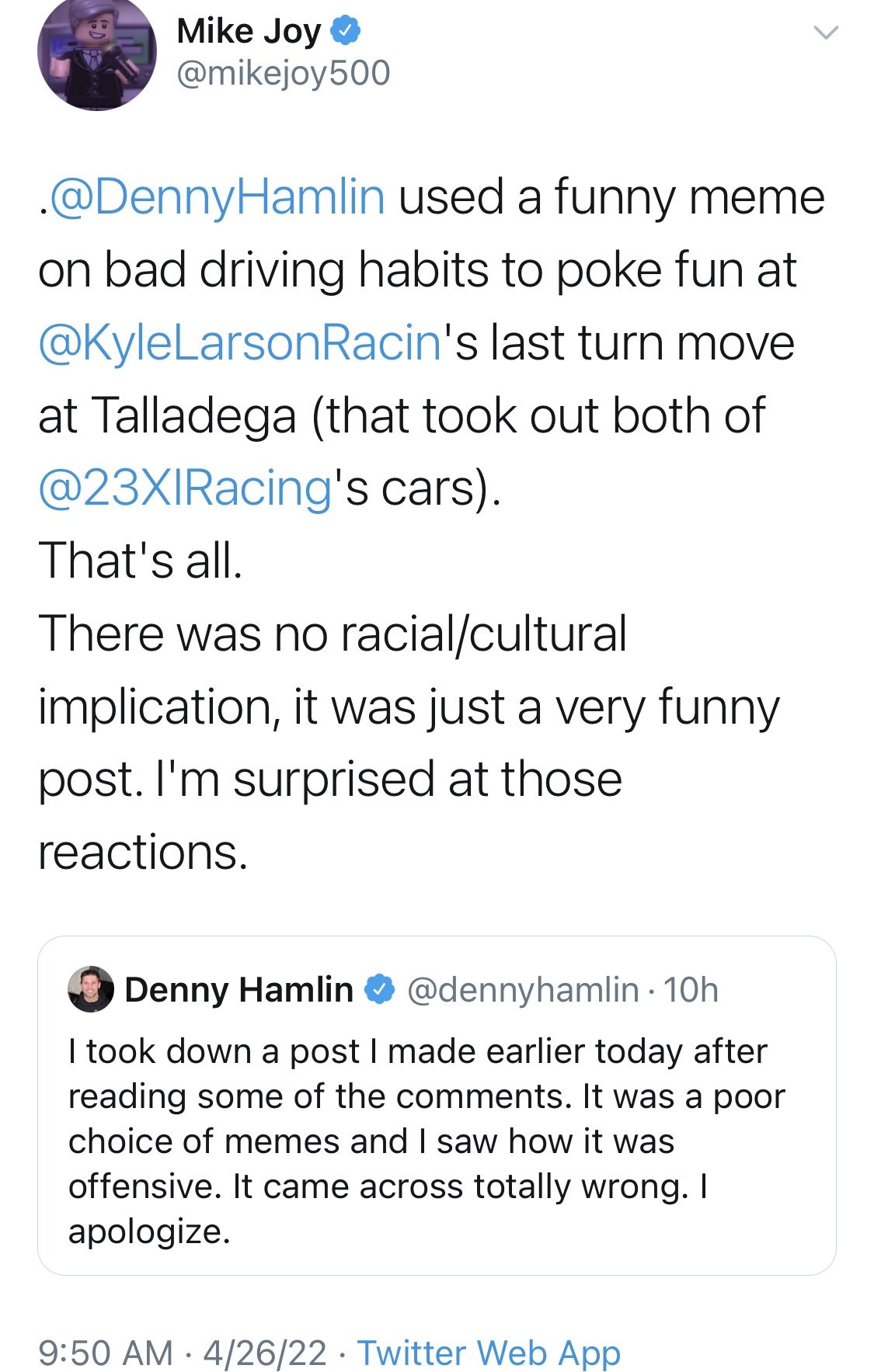 A screenshot of a now-deleted tweet from Mike Joy.

As an organization, NASCAR — working to be more inclusive, diversify the predominantly white, male sport and welcome all fans and participants — obviously saw the anti-Asian-American racism in Hamlin’s tweet. And Tuesday, the governing body announced: “This morning, we alerted Hamlin that he must complete sensitivity training and the process must be started by the end of this week.”

Toyota, the manufacturer for both 23XI Racing and Joe Gibbs Racing, the team for which Hamlin competes, agreed with NASCAR’s response.

It doesn’t matter if Larson — who NASCAR suspended and his former team fired in 2020 after the driver used the N-word — wasn’t offended by the joke. It doesn’t matter if you, the reader, are not offended by the joke. A racist joke is still racist. So again, Hamlin should have known better and at least reflected on why he found the joke funny and if it had the potential to cause harm to others.

Often rooted in bigotry or xenophobia, stereotypes are dehumanizing, and reinforcing them can have real-world negative impacts, including violence, especially when the target is a group of people already marginalized or discriminated against.

Hate crime directed toward Asian American and Pacific Islander communities is on the rise and has been exacerbated by the COVID-19 pandemic. As the Center for the Study of Hate and Extremism noted earlier this year, anti-Asian hate crime increased by 339 percent in 2021 compared with 2020, NBC News reported.

Via the American Psychological Association:

“In the incidents documented by Stop AAPI Hate, women were targeted more than two thirds of the time, pointing to more complex gendered stereotypes that also contribute to the current violence, said , including the shooting deaths of six Asian American women in Atlanta.”

Last year, eight people, including six women of Asian descent, were killed in a shooting rampage at Atlanta-area spas. It happened five days before NASCAR’s race at Atlanta Motor Speedway, and the track and sport honored the victims.

“It definitely hits closer to me probably,” Larson said after winning that 2021 Atlanta race. “Hopefully things will get better in our world. It’s just a terrible, terrible time for Asians. I hope it gets better.”

Barely a year later, one of NASCAR’s biggest stars tweeted a racist joke to his sizable platform at the expense of AAPI communities, particularly women.

NASCAR’s sensitivity training is a slap on the wrist for Hamlin and others who have had to take it before as the result of their actions, including Kyle Busch after using an ableist and derogatory slur in 2021 and Larson after using the N-word in 2020. Whether that training had or will have a meaningful impact on those who have taken it will only be determined by their future behavior and actions.

Hopefully, empathy, compassion and humanity will be reinforced in addition to an education about how racism and bigotry impact people regularly and how to combat it. Hopefully, it will encourage Hamlin and others to ask themselves before saying something: Could this negatively impact an already discriminated against group of people, whether it’s about race, disability, gender or sexual orientation?

Hamlin might not have asked himself that before tweeting the racist meme Monday. But he should have.

Today24.pro
High school scoreboard: Saturday’s NCS, CCS, CIF results in baseball, softball, volleyball, lacrosse, tennis The ONLY 3 Upper Body Exercises You Need for Mass #1 Backyard Weed That Can Replace ALL Your Medications Why are eating disorders so hard to treat? - Anees Bahji