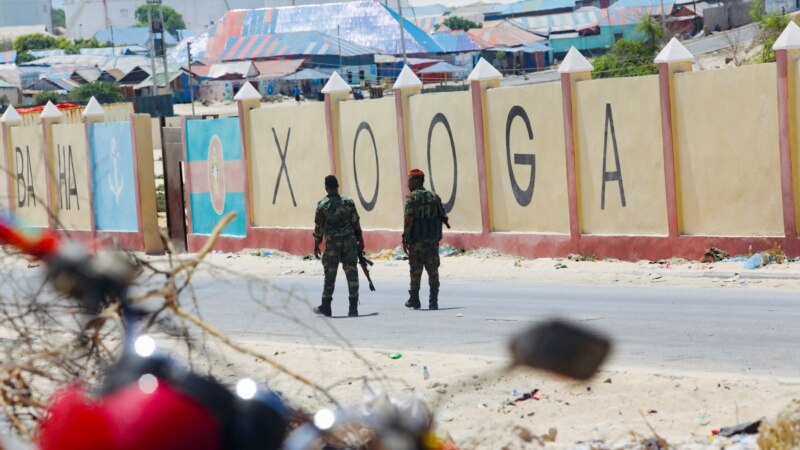 Somalia’s election process faced new delays Wednesday as the president and prime minister clashed publicly over election security procedures ahead of a planned parliamentary leadership vote in the capital. Prime Minister Mohamed Hussein Roble issued a statement authorizing African Union forces to take control of security at the fortified airport compound where the vote was to take place. “I have authorized ATMIS (African Union Transition Mission in Somalia) peacekeepers to immediately take over the security of the air force hangar as we complete the election of the parliamentary leadership and prepare for presidential elections next month,” he said. Just two hours later, President Mohamed Abdullahi Mohamed fired back, saying the national security election committee, which is chaired by General Abdi Hassan Hijar, Somalia's police commander, will oversee venue security. The “ATMIS mission supports the national armed forces by collaborating with the Somali police force, which has the lead in the security of the elections,” Mohamed said in a statement. By early afternoon, few lawmakers had shown up for the vote and a postponement seemed likely. 'Parallel' elections For safety reasons, some of Somalia's parliamentary proceedings take place inside a former air force hangar at Aden Adde International Airport. The modified hangar, known as Afisyone, or “the tent,” will host the vote for speakership of the influential 275-member lower chamber. It will also host upcoming presidential elections, which have yet to be scheduled. In Somalia's parliamentary elections, which started in 2021, thousands of clan elders selected 275 members of parliament for the lower house, while senators for the upper house were elected by five different state-level legislatures. Both chambers of Somalia's bicameral parliament then elect the next president. Although the elections of most lawmakers have been settled, a dispute has emerged over the election of 16 lawmakers representing Gedo, an administrative region within restive Jubaland in southern Somalia. Citing security concerns, Somalia's election committee moved the venue for the parliamentary vote to resolve the disputed seats from the capital of the Gedo region, Garbaharey, to the Gedo town of El Wak. The move was endorsed by Roble, but supporters of the president rejected the move and selected 16 MPs of their own to offset the 16 chosen in El Wak. Somalia's interim House Speaker Abdisalan Dhaban’ad and Roble want the 16 MPs elected in El Wak to participate in the speakership and presidential elections. But President Mohamed said lawmakers elected in the Gedo region's “parallel” elections should not participate until an agreement is reached. Scuffles and a shooting preceded Tuesday's disagreement over who would provide security for the upcoming votes. House Speaker Dhaban’ad reported that police commander General Hijar denied him the opportunity to swear in the El Wak MPs at the tent on Monday. He also reported that when they moved the swearing-in ceremony to a private hotel, security forces fired on the hotel. That prompted Roble to warn General Hijar and the director of the national intelligence agency, Colonel Yasin Abdullahi Mohamud — whose agents were accused of involvement in the shooting — against “disrupting” the election. General Hijar denied Dhaban'ad's accusations. General Hijar also said he wants to see the parliamentary leadership vote postponed for days so that he can prepare for the security of the venue. He said he could not guarantee security if elections take place on Wednesday. That angered the security minister, Abdullahai Mohamed Nur, an ally of Roble, who said he “suspended” the police chief. Meanwhile, the election for the leadership of the upper house took place peacefully on Tuesday. Veteran lawmaker Abdi Hashi Abdullahi has been reelected to the post. He has been a fierce critic of the current president’s policies.

Today24.pro
The ONLY 3 Upper Body Exercises You Need for Mass Why are eating disorders so hard to treat? - Anees Bahji The 2022 Audi S3 Is a Fun Sport Sedan that Rivals the Golf R #1 Backyard Weed That Can Replace ALL Your Medications