WALSALL fans have been left cringing after the club annnounced a brand new sponsorship deal with POUNDLAND.

The agreement will see their home ground renamed to the Poundland Bescot Stadium for at least the next three years.

Not only that, the Poundland logo will be splayed across the top of one of the stands at the Saddlers’ home ground, as well as at various other points in the stadium.

Poundland will also become the main shirt sponsor for Walsall’s home, away and third kits for next season.

The logo will be on the front AND back of the Saddlers’ shirts.

The League Two outfit revealed the three-year deal is the “largest commercial sponsorship in the club’s history”. 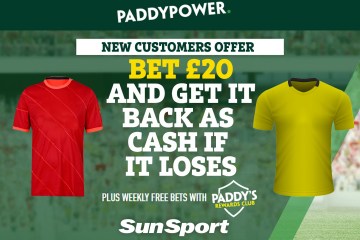 Liverpool vs Villarreal - bonus offer: Get money back as CASH if you lose

And while the deal is a lucrative one for the club, fans have been left with their heads in their hands following the announcement.

And another admitted they would sacrifice money NOT to be sponsored by Poundland.

They said: “Would actually pay an extra tenner not to have Poundland splashed across my chest.”

Rival fans were also quick to poke fun at the announcement.

And another added: “This Poundland thing with Walsall is beyond ironic.”

Poundland have been commercial partners with Walsall since 2020, but will now be the club’s main sponsor.

The company’s Head Offices are in Walsall.

‘Starbucks greenwashing’: Customer puts Starbucks on blast after barista used a plastic cup to make a drink and poured it into her reusable cup