A “FICTOSEXUAL” man has claimed he’s now struggling to communicate with the hologram he married four years ago.

A person younger than 18 cannot marry in Japan without parental consent but Hatsune Miku is not a real person, something Kondo had acknowledged before his unofficial marriage.

The 38-year-old identifies as a ‘fictosexual”, which means he’s sexually attracted to fictional characters.

Hatsune Miku is a blue haired virtual pop singer who is popular in Japan and among anime fans. 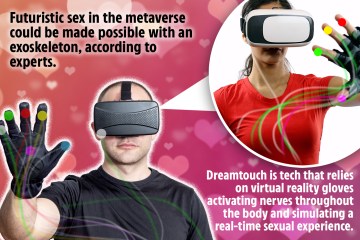 Kondo spent about about $17,300 to marry his fictional bride and says he still loves her even though software issues are currently negatively impacting the relationship.

According to Japanese news outlet Mainichi, Kondo can no longer speak with his virtual bride.

Since 2017, he’s been interacting with a virtual version of Miku via a device called Gatebox.

The $1,300 gadget was designed to project interactive holograms.

Aliens may have created our universe in a secret space lab, expert claims

It enabled Kondo to propose to a hologram of Miku and for her to attend the wedding.

However, the software Kondo relied on to speak to the holographic love of his life is no longer working.

Despite this setback, Kondo’s love remains the same.

He told Mainchi: “My love for Miku hasn’t changed.”

Kondo has a doll version of Miku that he can carry around.

He says the character helped him with his mental health after bullying at work left him depressed.

Kondo found Miku in 2008 and says he would spend all his time in his room watching videos of her.

He invited his friends and co-workers to his wedding but non of them came.

Kondo and his hologram weren’t alone though, 39 people attended the wedding, including a few people who also identify as fictosexual.

Kondo identifies as a fictosexual, which means he’s sexually attracted to fictional characters[/caption]

Today24.pro
#1 Backyard Weed That Can Replace ALL Your Medications State schedule for area high school teams Love Island villa in Majorca takes shape with huge pool and firepit spotted ahead of show launch The ONLY 3 Upper Body Exercises You Need for Mass