THE husband of kidnapping faker Sherri Papini was “distraught” and “frantic” in the aftermath of her bogus disappearing act, the ex-mayor of the city she staged the hoax in says.

Missy McArthur told The US Sun how she had been holding a meeting with other lawmakers in Redding, California in November 2016 when a grief-stricken Keith Papini burst through the doors, begging for help.

Keith Papini (right) filed for divorce against Sherri two days after she confessed to staging her kidnapping[/caption] Ex-Redding, CA mayor Missy McArthur said she is not surprised by the decision[/caption]

According to McArthur, Keith said he was frightened because he couldn’t find his wife Sherri, who he realized was missing after she failed to pick their two young children up from daycare on Nov. 2.

The distraught father pleaded with McArthur and other council members asking them to help him raise awareness about her disappearance by holding a public event.

“He was very, very distraught and incredibly upset,” McArthur said, “just frantic and beside himself with worry about [Sherri]. 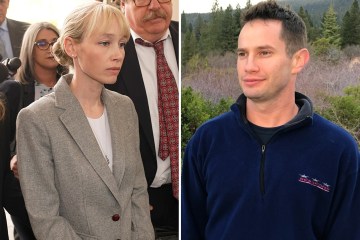 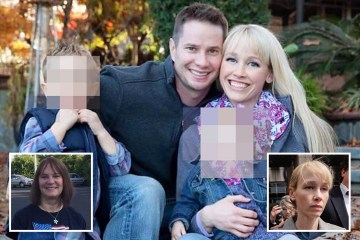 Calling Keith’s desperate appeal “heartfelt and sad”, McArthur said the council didn’t hesitate in offering their support to him, assuring: “Anything we can do to help we will.”

Sherri would miraculously reemerge 22 days later, spinning a frightening tale of how she was abducted and abused by two bandana-wearing Hispanic women for reasons unknown.

After police struggled to find a motive for the seemingly random crime, suspicions were soon raised about Papini’s tale though Keith and other family members offered her their unwavering support insisting they believed her wild claims wholeheartedly.

McArthur also stood by Sherri, calling any naysayers “trolls” in an interview with local media at the time.

However, following a six-year investigation, earlier this month Papini admitted her kidnapping claims were a complete fallacy and she’d actually been shacked up with her ex-boyfriend at the time she was presumed missing.

‘KIDS AND I ARE TRAUMATIZED’

Two days after Sherri’s bombshell confession, Keith filed for divorce claiming both he and their two children had been left “traumatized” by her successive lies.

“The whole problem started in November 2016 when Sherri left our children at a daycare and simply disappeared,” Keith is seen writing in a declaration for the Shasta County Family Court in documents obtained by The US Sun.

“Both I and, especially, our children were traumatized by her disappearance and I spent much time and money trying to find my wife,” Keith writes.

“The trauma inflicted on our children at the unexpected loss of their mother was heartbreaking,” he added.

As stated in the court papers, Keith and Sherri split up on March 3, the day she was arrested by police outside of her children’s school and “literally tackled” to the ground.

The fallout of her arrest has “kept life in turmoil” for the family ever since, Keith claims.

“In March 2022, Sherri Papini was literally tackled by law enforcement officers while arresting her – all in the immediate presence of our children,” the filing reads.

“They were again traumatized. After she was released from jail, she assured them that the arrest was all a mistake.

In the filing, Keith further charges that his children are “having a hard time” dealing with the fact their mother would lie to them about “such a major issue.”

Keith also claims that Sherri suffering from “significant” mental health issues and is in no fit position to provide “good parenting” to their kids, ages nine and seven.

Seeking full custody of the children, Keith adds: “We, both children and I, need time to recover and stabilize.

“I am asking that the court help me protect my children from the negative impact of their mother’s notoriety.”

Keith, 38, has remained relatively tight-lipped in the wake of Sherri’s arrest and confession, though broke his silence to PEOPLE earlier this week offering a brief explanation for his split from his hoaxer wife.

“I wish to make it clear that my goal is to provide a loving, safe, stable environment for [the pair’s children] and I believe the requested orders are consistent with that goal and the best interests of the children,” he said.

“I do not want to say anything in the pleadings connected to this matter that would inflame the situation or attract media attention.”

Lawyers for both Keith and Sherri have not yet returned a request for comment from The US Sun.

MacArthur, who met with the couple weeks after Sherri’s return, said she was “not surprised” by Keith’s decision to divorce his embattled wife.

“He was legitimately very worried and concerned about her when she disappeared,” McArthur said. “As a community, we were dismayed that she could have done such a thing to us – but that feeling must be tenfold for him, particularly because he had stood by her.

McArthur, who served twice as Redding’s mayor in 2012 and 2016, said she feels terribly for Keith and the two kids and can’t imagine what they must be going through.

“Hopefully the kids are young enough that they can get through all of this without any emotional scarring.

“But I’m sure the community will rally around them with helping hands and sympathize with them, trying to help undo as much damage as possible.”

Papini, 39, pleaded guilty to one count of fraud and one of lying to a federal officer earlier this month as part of a deal with prosecutors. She’s currently facing several years in jail and more than $300,000 in fines.

The once dubbed “super-mom” vanished on November 2, 2016, after leaving her home in Redding to go out for a run.

She failed to pick up her kids from a daycare center later that afternoon and was reported missing the same day by Keith.

Keith told Good Morning America at the time: “Everybody who knows my wife knows that there’s no reason for her to leave … She was definitely taken against her will.”

A motorist then found Papini on November 24 in rural Yolo County, around 150 miles from her Redding home.

She was emaciated and bound at the waist by a chain, which was tethered to her left wrist with a zip tie. Hose clamps were fixed to her ankles in what the Shasta County Sheriff’s Office later described as “pain compliance restraints.”

Papini was also covered in bruises, had her long blond hair shaved off, a “brand” on her right shoulder, and had suffered a broken nose.

She has since admitted to inflicting those wounds upon herself to substantiate her bogus claims.

After a six-year investigation, authorities determined that Papini was staying with her ex-boyfriend, James Reyes, at the time she was presumed missing.

The bizarre case has previously been likened to the plot of the 2014 movie Gone Girl, an adaptation of a Gillian Flynn novel of the same name, in which the lead character stages her own abduction to spite her husband.

The comparison has earned Papini the unfavorable moniker, the Gone Girl Faker.

Papini is due to appear in court for sentencing in July. She’s currently out on bond and staying with an unspecified relative.

As part of her confession, Papini released a statement claiming to be deeply remorseful for her behavior, though not all bought the apology.

“I am deeply ashamed of myself for my behavior and so sorry for the pain I’ve caused my family, my friends, all the good people who needlessly suffered because of my story, and those who worked so hard to try to help me,” Papini’s statement read.

“I will work the rest of my life to make amends for what I have done,” she added.

During a court hearing earlier this month, Papini was asked by Judge Shubb whether she was kidnapped, to which she replied “No, your honor.”

“Did you lie to government agents when you told them you were kidnapped?” Shubb further pressed.

Papini is due to appear in court for sentencing in July[/caption] She is facing several years behind bars and fines exceeding $300,000[/caption]