KARDASHIAN fans have slammed Kim for making “hypocritical” comments on her Hulu show after fights with Taylor Swift and Jordyn Woods.

A fan shared a clip of the video on Tiktok.

Kim Kardashian in a clip from her Hulu show[/caption] Taylor Swift attends the “All Too Well” New York Premiere on November 12, 2021, in New York City[/caption]

The video starts with Kim in a silver dress, looking in the mirror.

It then moves to the reality star speaking to the camera in a purple dress.

“I don’t comment to tear people down, especially another female,” she said. 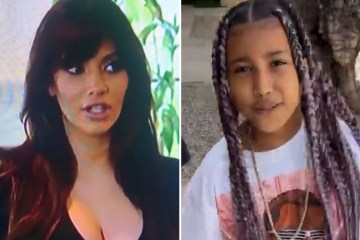 Kim said this quote on the premiere of the Kardashians premiere.

Her response was to Debra Messing‘s tweet about her hosting Saturday Night Live.

“Why Kim Kardashian? I mean, I know she is a cultural icon, but SNL has hosts, generally, who are performers who are there to promote a film, TV show, or album launch. Am I missing something?” Debra’s tweet read.

The Will & Grace star later apologized to Kim saying she didn’t mean to tear her down.

However, Tiktok users were quick to slam Kim, bringing up past feuds.

“Is that a joke? Taylor exists,” wrote one user.

“What about Taylor Swift? and Amber Rose? and Chloe Mortez? Jordan Woods?” asked another.

Another Tiktok user said, “It seems nothing happened in 2016 then…”

In case you have no idea why fans were commenting that we are here to catch you up.

Taylor Swift’s feud with Kim and Kanye West goes back to 2009.

Kanye interrupted Taylor’s acceptance speech for Best Female Video at the VMAs when he thought Beyonce should have won the award.

She was mad and embarrassed but eventually forgave him and became friends until 2016 rolled around.

Apparently, Kanye called Taylor asking if he could name-drop her in a song, singing, “I feel like me and Taylor might still have sex, yeah, I made that b***h famous” from Famous.

However, he did not tell her about the first part, or about calling her a b***h, and worked that into the song without her knowledge.

Kim was filming the whole thing and later leaked the video, trying to make Taylor look bad after she seemed enthusiastic about the song.

The backlash from the video had many Kardashian fans’ Twitter accounts using snake emojis and calling her names.

The full conversation made its way online and Taylor posted that she “was telling the truth the whole time about that call”.

“You know, the one that was illegally recorded, that somebody edited and manipulated to frame me and put me, my family, and my fans through hell for four years,” she added.

Kim then followed up with numerous tweets saying that the Cardigan singer was “lying.”

“To be clear, the only issue I ever had around the situation was that Taylor lied through her publicist who stated that ‘Kanye never called to ask for permission…’ They clearly spoke,” Kim tweeted.

She went on to say that the song had not been fully written yet, but was mad that Taylor’s team said they declined him using the song.

The 41-year-old also said that the clip would not have been leaked if Taylor “had not lied.”

Because of those comments, Taylor went into hiding for almost a year, with no social media presence, public appearances, or music releases.

She came back stronger though in 2017 with her album, reputation.

Many songs about the rapper were featured on the album including Look What You Made Me Do and This Is Why We Can’t Have Nice Things.

In 2019, Kim appeared on Watch What Happens Live With Andy Cohen.

He asked her if she and Taylor still had beef.

“Over it,” the makeup mogul replied. “I feel like we’ve all moved on.”

The fight is more involved than that, but that was the main reason they don’t speak anymore.

Jordyn Woods was once a friend of the Kardashian/Jenner clan.

But once it came out that she hooked up with Khloe’s ex, Tristan Thompson, she was shunned from the family.

The model confirmed in 2019 on Red Table Talk that she did kiss Tristan, stating that there was “no passion” and “no tongue.”

Kylie was very hurt by her actions, as they had been best friends for a long time.

Kim tried to stand up and support her sister, but she just made it worse.

In 2019, she shared a Snapchat that threw shade at Jordyn.

In the since expired clip, the reality star was sitting in the backseat with Malika Haqq.

While they were listening to the radio, Kim picked out songs with specific lyrics aimed at Jordyn.

While pretending to sing to Nivea’s Don’t Mess With My Man song, Kim wagged her finger at the camera.

Reddit users were furious over Kim’s actions and shared Kylie’s response from a KUWTK scene.

In the clip, Kylie mentioned that she saw Kim’s Snapchat vid and said: “I feel like the singing and the internet stuff like it’s just not okay.”

She continued: “We don’t need to bully somebody is all I’m saying.”

Most fans condemned the bullying and said that it was mostly Tristan’s fault.

It does not seem as though the Kardashians and Jordyn have made up.

Horoscope today, Friday May 20: Daily guide to what your star sign has in store for your zodiac dates