YOU’VE got to hand it to Madonna.

Although she may now have called time on her three-year relationship with her toyboy boyfriend Ahlamalik Williams — 35 years her junior — she can’t half snare the young ’uns.

Granted, her biological age and the age of her ever-evolving face might be two different things, but you have to give credit to this magnificent 63-year-old.

And now there is actress Thandiwe Newton, who at 49 has been pictured with her new boyfriend, musician Lonr, just half her age at 25.

I am quite in awe of these women. They are proving to be the exception to the rule that women in mid-life are over the hill, good for nothing.

For decades, nay, centuries, society has accepted ageing men walking arm in arm with girlfriends young enough to be their daughters, even if we may raise half an eyebrow. 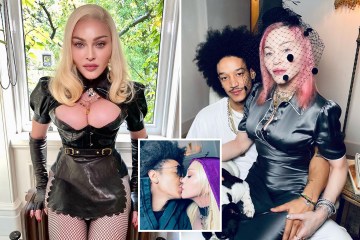 NOT MAD ON YA! 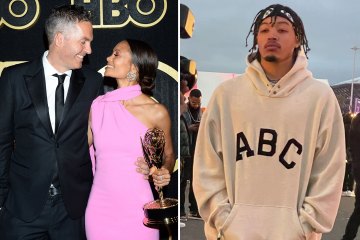 When a woman is the older one (and by quite some distance), the world has tended to find it unsettling, awkward, embarrassing, shameful and perhaps even plain wrong.

But the times, they are a changin’ and wrong it is no more.

Older women are out there rocking it, doing it for themselves. And increasingly they are doing so very proudly with a much younger catch. And I’m all for it.

Like Thandiwe, I had come out of a long marriage and while I was not intentionally seeking younger men, they simply happened.

In many respects, for want of a better analogy, it’s rather like you have been driven around in an old banger for years and suddenly you get the chance to sit behind the wheel of a shiny, bright, new sports car.

‘There is often a greater stamina to contend with’

A car that goes at a different speed, is an unexpected divergence, responds with a new energy and movement, and fundamentally has the ability to make you feel like a completely different woman.

Because no matter how much we may have loved our old banger (and I have absolutely no judgment of Thandiwe’s ex-husband), it always runs the risk of becoming a bit stale, a bit same old, same old.

And before you know it, boredom has started to corrode the bodywork and predictability has rusted the gears.

In my case it was, initially at least, wholly accidental. Promise, guv.

I simply forgot to set an age range when I started out on my dating app journey just over a year ago and, as a result, I couldn’t understand why all these young men seemed to be coming my way.

I’m now 54, and I figured that, with more years behind me than in front, I should just go with the flow and see where it took me.

And it’s been quite the rollercoaster.

I suppose 95 per cent of the men I have dated in the past year have been in their mid-twenties.

For some bizarre reason — perhaps some pretension of still clinging on to a morsel of morality — I made the arbitrary decision to not date anyone who was younger than my oldest son, who has since turned 27.

To that end, the youngest encounter I had last year was 26. (See, I do have some morals.)

When you date someone this young, it means you are different generations.

You have different attitudes and perspectives. You are at different life stages. But if, like me, you have been stuck on autopilot for some years, it could be just the shake-up you need.

I don’t hold with all the suggestions that not being able to share the same cultural and historical facets of life makes the adventure negative and fruitless. It can be a real joy to hear new music and learn about new experiences. I embrace variations and anomalies. That’s what life’s about, surely.

Younger men come with a bit more invention, a bit more variety and openness. There is often a greater stamina to contend with too.

The conversation can be fresh and interesting because your mindsets are not the same — your lives may be poles apart but there is something joyfully incongruous about that.

While it would be wholly unjust of me to make a sweeping statement that the sex is superior (I can confirm it definitely is not guaranteed to be so), it does present itself as a considerably more varied experience.

Younger men come with a bit more invention, a bit more variety and openness. There is often a greater stamina to contend with too — perhaps something that eludes many in long-term, staid relationships.

Most young men have not had the chance to get to that stage yet, so their tank is still full and their imagination is going at full throttle.

That can be electrifying for a woman over 50 who thought her life might be more or less over.

And do not think all young guys are hulking stallions. They come in all shapes and sizes, but it’s about that fresh, alluring connection.

Many of them admit to loving the idea of an older woman because she’s more likely to be independent, less needy and, quite possibly, knows what she wants. Perhaps that is our appeal.

Of course, with all these positives, there are also negatives.

As a very general rule, younger men tend to be more inconsistent and unreliable.

They live in their own world — they often have few, if any, responsibilities so they are naturally the most important person in their life.

There is an underlying selfishness and ego which inhabits them. They will have plenty of time for obligation, liability and dependability as they age, so why would they have much understanding of that now?

I have had a few dates with men closer in age to me — say, just the ten years younger — and admittedly they were not entirely without benevolence. But I’m afraid I would have needed to employ a porter to help carry all the baggage some of them came with.

This may sound unkind, but in my opinion women are much better at moving forward in life with their baggage than men.

Too simplistic? Not at all.

Sometimes mature men’s circumspection, hesitation and bruised past made dating them a bit like walking through molasses on a scorching day.

And it was a shame, because I rather thought it would be a better relationship investment to have someone my age-ish by my side.

But while I, too, have baggage, I try not to let it stop me cracking on with life.

Everyone pretends that age is just a number and doesn’t matter. But deep down we do have unfair, socially constructed morals about what age differences are permissible in relationships and which are not.

Although I may not necessarily be in pursuit of anything specific on the romantic front (choosing instead to let it find me), I still think my odds are better stacked in favour of younger guys.

The energy and the excitement, for one, can give you a whole new lease of life.

I like the idea of continuing to grow as a person and that is only going to happen if I am learning new tricks.

I don’t want to stand still. I have no intention of taking it easy, retiring into a greying background of decrepit middle age. I want freshness, vitality and energy around me.

Anything else would be just like getting back into that old banger.