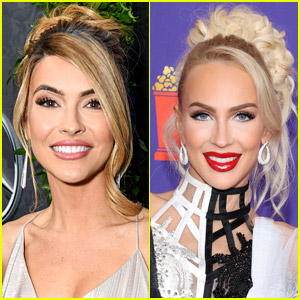 A bombshell new photo of Christine Quinn doing a photo shoot just two days after skipping the Selling Sunset reunion has been revealed…and Chrishell Stause is calling her a liar.

If you missed it, the Selling Sunset season five reunion filmed on Sunday (April 24) and fans immediately noticed that Christine was missing from the group pic.

Later, her rep revealed that on Saturday (April 23), she tested positive for COVID-19. However, TMZ got photo evidence of Christine at a photo shoot with Real Housewives of New Jersey‘s Melissa Gorga on Tuesday (April 26). The CDC currently recommends that COVID positive patients isolate for five days after their positive test.

Fans are now pointing out that Christine either skipped her quarantine, or, skipped the reunion due to the tension highlighted in season five between her and the other O group realtors.

Now, Chrishell is responding to TMZ’s report that Christine was at a photo shoot yesterday, two days after skipping the Selling Sunset reunion.

In response to TMZ‘s tweet about Christine‘s photo shoot, Chrishell tweeted a GIF of TV host Maury Povich saying his signature phrase, “The lie detector test determined that was a lie.”

Today24.pro
Why are eating disorders so hard to treat? - Anees Bahji The ONLY 3 Upper Body Exercises You Need for Mass #1 Backyard Weed That Can Replace ALL Your Medications The 2022 Audi S3 Is a Fun Sport Sedan that Rivals the Golf R